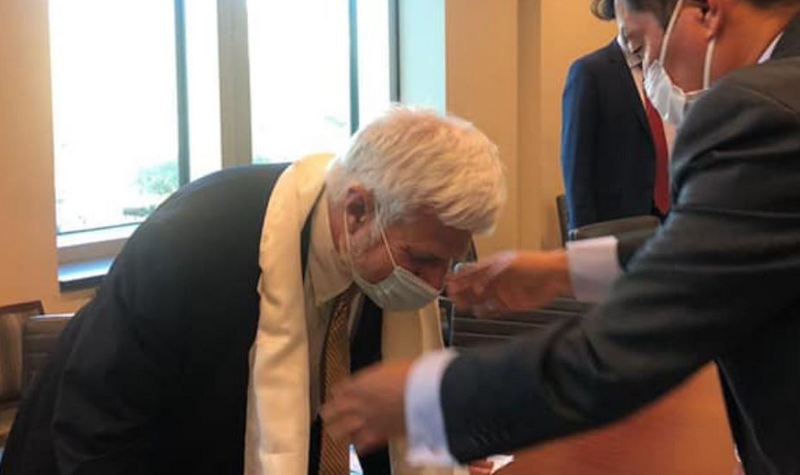 Washington DC — Tibetan leaders congratulated Robert A. Destro, the current Assistant Secretary of State in the Bureau of Democracy, Human Rights, and Labor on being appointed as the new US Special Coordinator for Tibetan Issues.

The remarks came after US Secretary of State Mike Pompeo announced the appointment of Assistant Secretary Robert A. Destro as the new U.S. Special Coordinator for Tibetan Issues.

'Proud to name Robert Destro as U.S. Special Coordinator for Tibetan Issues. In this role he will address the dire human rights situation the people of Tibet face and will serve as the real DonaldTump Administration’s conduit to the Tibetan diaspora on priority issues,' Secretary of State Mike Pompeo tweeted.

"I am proud to serve as the State Department's Special Coordinator for Tibetan issues. I look forward to engaging Tibetans and partners around the world to promote human rights and fundamental freedoms for Tibet in the PRC and beyond," Assistant Secretary of State Robert Destro tweeted.

During the meeting with Special Coordinator Destro, President Dr Sangay conveyed his warm congratulations on his appointment as the new US Special Coordinator for Tibetan Issues on Thursday. Sikyong Dr Sangay also urged Destro to press the Chinese government to have a dialogue between the envoys of His Holiness the Dalai Lama and the Chinese government based on the Middle Way Approach.

“Today’s unprecedented meeting further strengthens the narrative that the Central Tibetan Administration will be treated akin to other governments by the US State Department, and it is yet another significant win for Tibetans and allies. I want to congratulate Special Coordinator Destro and welcome him to the Tibetan freedom struggle. I am convinced that he will be an ardent advocate for the Tibetan cause and the CTA under the leadership of His Holiness the Dalai Lama,” remarked Sikyong Dr Lobsang Sangay.

Dr Sangay also shared a picture with Destro on Facebook. “Great honor to meet with the Special Coordinator on Tibetan Issues Robert A Destro. This is the first time in six decades, a Sikyong (President) of the Central Tibetan Administration (CTA) was formally invited inside the State Department,” Sangay said in the post.

“I believe this appointment was made in the wake of recent news about gross human rights violations, violations that are similar to the forced labour camps in Xinjiang, that have accelerated these past few months under the Chinese Communist Party orders—it has been reported that half a million Tibetans are being coerced into forced labour. This appointment is therefore a welcome sign of meaningful support for Tibet by the US Government. And we will gladly take this opportunity to discuss the Middle Way Approach with the Chinese government,” says Representative Ngodup Tsering.

“We firmly believe that Your Hon’ble will lead US efforts to promote dialogue between the People’s Republic of China and the Dalai Lama or his representatives; protect the unique religious, cultural, and linguistic identity of Tibetans; and press for their human rights to be respected. We are delighted to know that you will support in engaging Tibetan leaders and international partners and experts to address the Tibet’s issues," Speaker Jungney said.

He further wrote, “As you have witnessed, since the illegal invasion of Tibet by the People’s Republic of China, the Tibetan culture, language, and history are under utmost threat from its massive destruction, oppression and brutal regime of Communist China. Thus, it becomes the moral responsibility of every Tibetans living outside of Tibet to preserve and to promote the unique identity of Tibet. With our continuous efforts for more than 60 long years, we were constantly facing challenges and difficulties in undertaking our struggle under the relentless threat and policies imposed by Communist China, especially to the Tibetans inside Tibet.”

“As the vision of His Holiness the 14th Dalai Lama and the policy adopted democratically by Central Tibetan Administration; the Tibetan people, we are seeking genuine autonomy within the framework of the People’s Republic of China serving the interest of both China and Tibet through Middle Way Approach. The Approach which is engaged through peaceful dialogue between the Chinese authorities and the Representatives of His Holiness the 14th Dalai Lama has come to a standstill after the 9th round of Negotiation in January 2010," he added.

"Hence, I believe that your appointment as the new Special Coordinator sends a strong message to the Chinese authorities that the Tibetan issue is still very much alive and will help both the parties in resuming the peaceful dialogue. It will also help in promoting the policies that protect the distinct identity of Tibet and safeguard the human rights situations inside Tibet,” he further said.