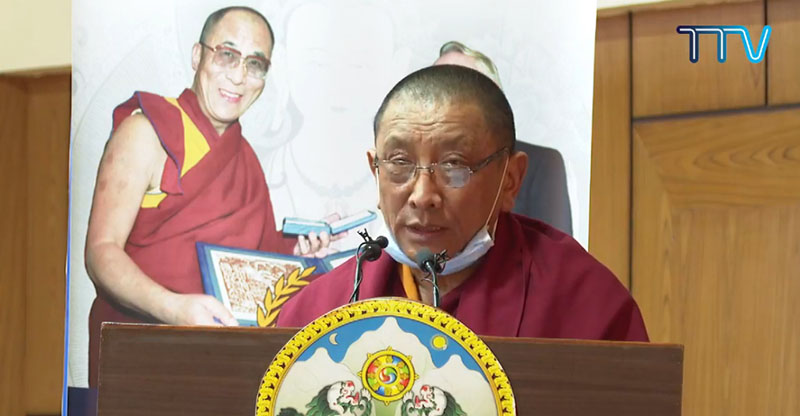 Dharamshala, India — “The Chinese government must realize that it cannot continue casting a blind eye to the sentiments and aspirations of the Tibetan people in Tibet. The genuine solution for Tibet can only be met by dialogue through the Middle Way Approach”, said Kashag, while marking the Human Rights Day at the Sikyong Hall, Central Tibetan Administration (CTA) on December 10, 2020.

Kashag, Tibetan Parliament-in-Exile and the Tibetan Supreme Justice Commission, heads of the Autonomous bodies, Members of the Standing Committee of the parliament, Secretaries and Additional Secretaries of the CTA departments attend the occasion that marks the Nobel Peace Prize day of His Holiness the 14th Dalai Lama as well as Human Rights Day at the Sikyong Hall, CTA, on December 10, 2020.

“Today marks the 31st anniversary of the conferment of the Nobel Peace Prize on His Holiness the Great 14th Dalai Lama. On this auspicious occasion, the Kashag bows down in deep reverence and gratitude to our most revered leader, His Holiness the Great 14th Dalai Lama and joyously extends our greetings to the Tibetan people, friends and supporters around the globe”, said the Karma Gelek, officiating President of CTA.

“His Holiness was awarded the prestigious Nobel Peace Prize in 1989 for advocating peaceful solutions based upon tolerance and mutual respect while seeking to resolve the issue of Tibet. For over six decades, His Holiness’ commitment to peace and emphasis on inculcating compassion, tolerance and kindness, and efforts to promote religious harmony and ethics based on universal values continue to pave the way for a just society. His Holiness has often referred to ancient Indian knowledge as a ‘Science of Mind’ encompassing the workings of mind and emotions and thus, has remained steadfast in his commitment to revive it. As one the world’s most beloved leader, His Holiness’ tireless initiatives to usher in a more peaceful world has, in turn, garnered support for the Tibet cause globally”, as stated in the statement of Kashag delivered by Ven Karma Gelek Yuthok.

“Today is also the Human Rights Day. In the case of Tibet, the repressive policies of the Chinese government continue to trample upon the Tibetan people’s fundamental rights enshrined in its constitution and the Law on Regional National Autonomy. Since 2009, 154 Tibetans have self-immolated and they have given up their lives to call for the fundamental freedom in Tibet”, said the minister while marking Human Rights Day.

“In June this year, Lhundrup Drakpa, a Tibetan singer was sentenced to six years of imprisonment for singing a song. In his song “Black Hat” released in March 2019, he compares the sufferings of the Tibetan people to a ‘hell on earth’ and sings about the oppression of the Tibetan language. Lhundrup Drakpa is yet another Tibetan added to the long list of artists imprisoned for expressing their plight under the occupation”. “Lhundrup’s song alludes to the stories of Tibetan like, Rinchen Tsultrim, a monk from Nangshig Monastery in Ngaba region, who was arbitrarily arrested over a year ago and has since been detained incommunicado on alleged charges of engaging in political activities. In a similar report, a few days ago, Gendhun Lhundrup, a well-known Tibetan writer and poet from Rebkong was arbitrarily arrested and his current whereabouts are unknown”, added the minister.

“In September this year, a report published by the Jamestown Foundation revealed the implementation of coercive military-style labor camps masked as “vocational training” under the guise of poverty alleviation program in Tibet. The report also found evidence that over half a million Tibetans were sent through such camps in just the first seven months of the year 2020. The Inter-Parliamentary Alliance on China (IPAC) condemned the widespread system of forced labor in Tibet and called upon the Chinese government to immediately end its atrocities in a statement signed by 63 parliamentarians around the globe”, the Kalon of the Department of Religion and Culture stated.

“Despite the Chinese government’s blatant attack on the fundamental rights and identity of the Tibetan people, Tibetans in Tibet continue to resist through non-violent protests. The struggle of the Tibetan people, which is a struggle for truth, justice and freedom continue to receive world-wide support”. “During the UN Third Committee General Debate held this October at the UN headquarters in New York, 39 countries called on China to respect the human rights in Tibet, East Turkestan and Hong Kong in their joint statement. Recently, the US House of Representative unanimously passed a bill endorsing the Middle Way Approach and recognizing the significance of the commitments and contributions of His Holiness the 14th Dalai Lama to humanity”, continued ven Karma Gelek.

“This past October, Canada’s Ontario Legislature passed a unanimous bill tabled by NDP MMP, Bhutila Karpoche recognizing the month of July as “Tibetan Heritage Month” which is a matter of pride for the Tibetan people”. “In the same month, the US Secretary of State Mike Pompeo announced the appointment of Assistant Secretary of State, Robert A. Destro as the new Special Coordinator for Tibetan issues. Just days after the announcement, the President of the Central Tibetan Administration (CTA) was formally invited to the US State Department and met with the Special Coordinator”, the minister portrays. “In November, the President of the CTA formally visited the White House and met with the officials of Asia related issues and the staff members from both the President and the Vice President’s Office. The visit to the State Department and the White House is historic and we thank the US government for its continued support to our just cause”. “The Chinese government must realize that it cannot continue casting a blind eye to the sentiments and aspirations of the Tibetan people in Tibet. The genuine solution for Tibet can only be met by dialogue through the Middle Way Approach, he explained as per the statement of Kashag.

In 2008, envoys of His Holiness presented the ‘Memorandum of Genuine Autonomy for the Tibetan People’ to the Chinese government during the eighth round of talks held in Beijing. In 2010, notes on the memorandum addressing the concerns raised by the Chinese government was presented. His Holiness and the CTA remain committed to resolving the issue of Tibet as per the memorandum and thus, we stand ready for dialogue and urge China to reciprocate the call for dialogue”. “As per the WHO, COVID-19 has already claimed the lives of over 1.5 million and infected over 65 million around the globe. China’s employment of old tactics of crackdown on the freedom of speech through repressive censorship during the initial stage of the COVID-19 has contributed to a global pandemic. A survey carried out by the US-based Pew Research Center indicates that China’s initial mishandling of the COVID-19 has intensified distrust and unfavorable views on China. For China to win back the trust of the world, and to reinstate its position as a global leader, it must make timely progress towards democracy, freedom and the international rule of law”, clarified the officiating Sikyong.

“A move towards peace was recently made with Honduras becoming the 50th country to sign the UN Treaty on the Prohibition of Nuclear Weapons allowing the treaty to enter into force on 22nd January 2021. His Holiness the Dalai Lama, a lifelong advocate for Nuclear disarmament, welcomed the news and commended the United Nations and the 50 countries for their concerted effort that would “secure a genuine and long-lasting peace in our world.” We welcome and acknowledge the instrumental step towards peace”. “The Kashag would like to take this opportunity to thank governments, parliamentarians, leaders, organizations and individuals who continue to champion the cause of Tibet. We also extend our deepest gratitude to the people and government of India for their continued support to the Tibetan people for over 60 years in exile”, extended the minister.

“This November marks almost a year since COVID-19 first emerged from the city of Wuhan in China. The world continues to reel under the second wave of COVID-19. We remember in our prayers all the lives lost and also the people who grieve these irreparable losses. The CTA will continue to take on the challenges presented by this pandemic and provide necessary support and assistance. As such, we urge all to do your part and remain committed to following the preventive measures”, reminded the Kalon.

“In His Holiness’s Nobel Prize acceptance speech in 1989, he pointed out that living in harmony with each other and nature is not just a dream but a reality. He stated, “We are dependent on each other in so many ways, that we can no longer live in isolated communities and ignore what is happening outside those communities…” His Holiness’ words are not only pertinent to the current challenges humanity faces but also is a guiding light for a more harmonious and prosperous future”. “Finally, we pray for the long and healthy life of His Holiness the Great 14th Dalai Lama and for all his noble aspirations to be fulfilled. May peace prevail on earth and may our long-cherished goal of freedom and reunion in the Land of Snows be realized soon”, he conveyed while concluding the statement of Kashag.