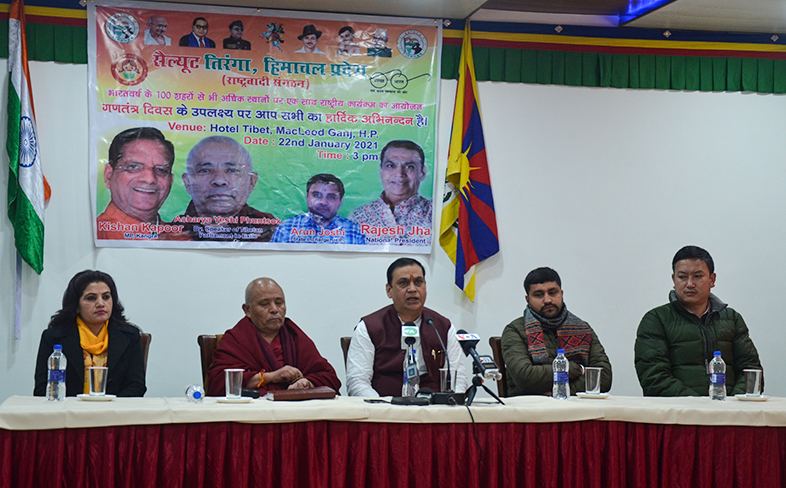 “Salute Tiranga supports the Tibetan struggle for freedom and I promise that from now on, the cause of Tibet will be one of the main objectives of Salute Tiranga. I want to guarantee everyone present here that we will organize a huge event in Delhi to spread awareness about Tibet where many important ministers of Indian Government will be invited. We will make this a mass movement, so that people from all over the nation can fight for the Tibetan cause to help Tibet claim its right to independence,” said Shri Rajesh Jha, National President of Salute Tiranga. “The people of Tibet have always supported India; therefore, it is the responsibility of Indian citizens to aid Tibetans achieve their goal,” he further added.

Acharya Yeshi Phuntsok, Deputy Speaker of TPiE, highlighted the six important things for every nation and its citizens; national language, national flag, national anthem, national emblem, national currency and national constitution. “This world has 250 nations. Being a political science student, I had the opportunity to study the constitutions of all of them and realized that 35 out of 250 countries are still occupied. Tibet is one of them,” he explained.

“Everyone is aware about China’s constant efforts of invasion in its neighboring countries. Many people sacrificed their lives for the sake of their nation and its people. Even today the people of Tibet are fighting for its cause, sacrificing their lives but have not given in to China,” declared the Deputy Speaker.

“Last year was very unfortunate for the entire world. Coronavirus spread by China affected the whole world. Something of this scale had not happened even during the Second World War. So many people have lost their lives due to the pandemic inflicted upon the world by China who is now facing the repercussions of this. Excluding 2020, for the last 59 years, the people of Tibet had to travel around the world to spread awareness about the cause of Tibet and China’s oppression. But due to this pandemic, the world saw the true face of China and the Tibetan struggle came to light,” he expressed.

“If we hadn’t come to India in 1959, Tibetan struggle for freedom wouldn’t have reached the international stage on this scale. The relationship between India and Tibet has existed for many years and is linked to culture, language, faith, environment, trade, and dynasty. Most of the water sources of India originated in Tibet. To mark the Mutual Trade Treaty between India and Tibet, ‘Lavi mela’ is still observed in Rampur, Himachal Pradesh,” Acharya Yeshi Phuntsok added while talking about the Indo-Tibetan relationship and ended his speech by thanking Salute Tiranga for organizing the event.

Salute Tiranga is a nationalist organization with its branches spread across 22 states of India. Their goal is to maintain the unity and integrity of the country and they work to spread public awareness about nationalism. They support the families of martyrs who lost their lives while protecting the country and its people with the help of initiatives like ‘Ek Shaam Shaheedon ke Naam’. They also work for the cause of women empowerment and cleanliness by participating in national initiatives of ‘Beti Bachao, Beti Padhao’ and ‘Swattch Bharat Abhiyan’