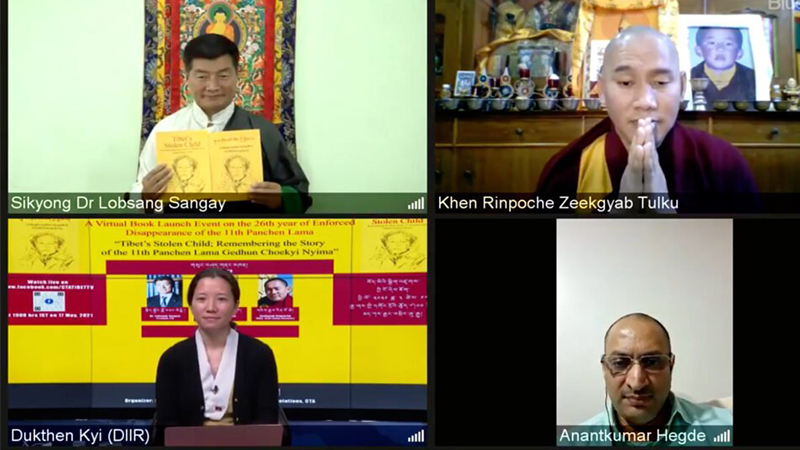 On the evening of May 17, 2021, the Central Tibetan Administration's Department of Information and International Relations hosted a virtual book launch talk event to mark the 26th Anniversary of the Enforced Disappearance of His Eminence the 11th Panchen Lama by the Chinese government in 1995.

The book features highlights of the legacy of the 10th Panchen Lama, Lhundrup Choekyi Gyaltsen. The 10th Panchen Lama’s 70,000-Character Petition, which he presented to top Chinese leaders, is a fearless confrontation detailing the sufferings of Tibetans under the CCP’s failed and abusive policies in Tibet. Mao Zedong called the Petition “a poisoned arrow aimed at the Party” and the 10th Panchen Lama was accused of working against the Chinese government. He was then subjected to severe beatings and struggle sessions followed by 14 years of imprisonment.

“The book is yet another reminder to China that no matter how many years may pass, Tibetans and supporters will continue to seek Panchen Lama Gedhun Choekyi Nyima’s release and keep the flame seeking truth and justice alive,” said the CTA.

Venerable Zeekgyab Rinpoche gave a brief introduction of the Panchen Lama lineage's origins, titles, and significance at the event. “The Dalai Lama and the Panchen Lama share a patron-priest relation and each is involved in the process of recognizing the other’s reincarnation. The Chinese government has abducted the 11th Panchen Lama, recognized by His Holiness the 14th Dalai Lama, at the age of 6 for the sole purpose of meeting its political motives and in the process disrespected the Tibetan Buddhism’s age-old tradition of reincarnation,” said the Rinpoche.

Mr. Anant Kumar Hegde expressed his support and solidarity with the Tibetan people by saying, “Today marks the 26th year since the Chinese government abducted one of our spiritual leaders, the Panchen Lama, and I would like to reassure that the citizens of India are in support of Tibetan people.” He pointed out that the COVID-19 situation has exposed the double-face and the unreliability of the Chinese Communist Party and further remarked that “in the field of humanity, environmental concern, and moral ethics, China has nothing to show for.”

“Just as Israel proclaimed its independence in 1948 after almost 1800 years of dispersion, so Tibetan people should never accept defeat but rather keep up with their fight and struggle, for one day, the Tibet’s issue too shall be resolved,” he added.

President Dr. Lobsang Sangay virtually unveiled the books to the public, in both English and Tibetan, and said, “for the last 26 years, the Tibetan community has been waiting to see the release of the 11th Panchen Lama who remained disappeared from the eyes of the whole world since his abduction at the age of 6."

“For more than two decades, many governments including the United States, Canada, the European nations, have asked the Chinese government to reveal the Panchen Lama’s whereabouts and living conditions but every time they failed to gain reliable information”, the President added.

“the United Nations organizations such as the UN Human Rights Council, the UN Working Group on Enforced or Involuntary Disappearance, Committee on the Rights of the Child, and Committee Against Torture have all enquired the Chinese government on the Panchen Lama’s fate in the past,” said the president of CTA.