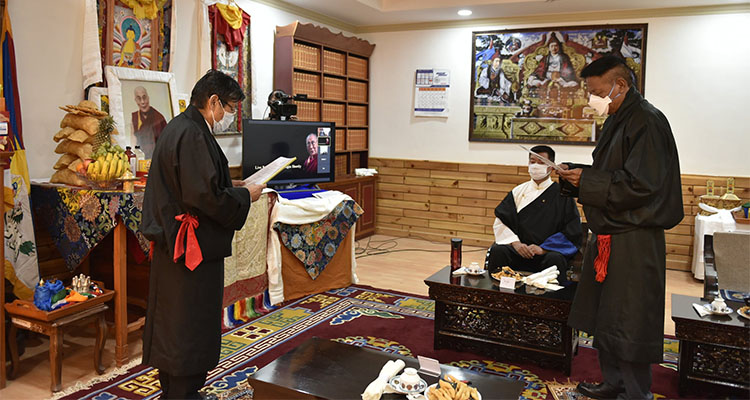 Elected Sikyong Penpa Tsering (R), takes the oath of office and secrecy before the Chief Justice Commissioner of the Central Tibetan Administration, Mr Sonam Norbu Dagpo, (L) at the swearing-in ceremony at the Tibetan Supreme Justice Commission, Dharamsala, on 27 May 2021. Photo/Tenzin Phende/CTA

Dharamshala, India — Penpa Tsering was sworn in Thursday as the President of the Tibetan government-in-exile, pledging to put maximum effort to resolve the Sino-Tibet conflict and strengthen the democratic polity.

The swearing-in ceremony held at the Tibetan Supreme Justice Commission, Gangchen Kyishong, Dharamshala, India, on May 27, 2021. The oath of office was administered by Sonam Norbu Dagpo, the Chief Justice Commissioner of the Central Tibetan Administration.

This came after the Tibetan Supreme Justice Commission's Chief Justice Sonam Norbu Dagpo and two justice commissioners reportedly resumed their duties.  The Tibetan Parliament-in-Exile (TPiE) sacked Chief Justice Sonam Norbu Dagpo from office on March 25, 2021 with two Justice Commissioners. TPiE had terminated them for interfering with the House's business, citing Article 58 of the exile Tibetan Charter. During the 9th session of the 16th TPiE, 31 members of the TPiE voted in favour of removal with a two-thirds majority. Since then, the judicial branch has been in a state of disarray, with no new commissioners appointed.

Tsering is the 2nd Sikyong directly elected by Tibetans all around the world after His Holiness the Dalai Lama's complete devolution of political authority in 2011.

The ceremony completes a successful transfer of power from the outgoing Sikyong Dr Lobsang Sangay to the new Sikyong Penpa Tsering and his administration.

His Holiness the Dalai Lama delivered a virtual speech during the inauguration, and congratulated the new Sikyong Penpa Tsering, and thanked the outgoing Sikyong Dr Lobsang Sangay for his tremendous service over the last ten years.

"The main responsibility of the Kashag is to seek relief from the critical challenges being faced by endangered Tibet and suffering of the Tibetan people. We shall resolutely tread the path of Middle Way espoused by His Holiness the Dalai Lama, which commands high degree of support by the general population in and outside Tibet and unanimously approved by the Tibetan Parliament in Exile. Based on which, we will reach out to the Chinese government to find a mutually beneficial, negotiated, non-violent solution to the Sino-Tibet conflict. We hope that this, in turn, shall set a good example in resolving conflicts around the world,” said the new Sikyong on resolving the Sino- Tibet conflict.

“Till such a lasting solution is found, we shall represent the voices of Tibetans inside Tibet and by pooling the resource of every single Tibetan, optimize our global advocacy efforts. We shall monitor and conduct a thorough study of the basic issues concerning environmental destruction and protection of the Tibetan national identity inside Tibet. We shall not dither from pointing out the gross mistakes of the Chinese government’s policies and programs and seek to redress, withdraw or amend the wrong policies. Likewise, we will put in every effort to seek increased interaction between Tibetans in Tibet and those in exile and work towards realizing the wish of His Holiness the Dalai Lama to visit China,” he added.

“The Chinese government has on the 21st of this month issued a white paper titled ‘Tibet Since 1951, Liberation, Development, and Prosperity’. All I can is say today is that we are open to sending a people to verify all the claims made in the white paper,” said the Sikyong.

The new Sikyong declared, “one of the first tasks of the Administration would be to look into what more can be done to contain the spread of Covid-19 within the Tibetan Communities in India and Nepal. We will review the structure of the Covid Task Force both at the Central and local level and take all possible remedial measures. I will be issuing a statement on remedial measures and guidelines by the Administration in a day or two”.

“To conclude, I take this opportunity to thank all freedom-loving governments, parliaments, and Tibet supporters around the world and in particular, India and the United States for their love and support for Tibet and the Tibetan people till now. Your support is a source of inspiration for all of us in Tibet and in exile. Therefore, I appeal to you to continue to support us till a lasting solution is found,” said Penpa Tsering, the president of CTA.

The entire ceremony was broadcasted on Tibet TV(TTV) due to the restrictions on gathering imposed by the State Government of Himachal Pradesh, India.