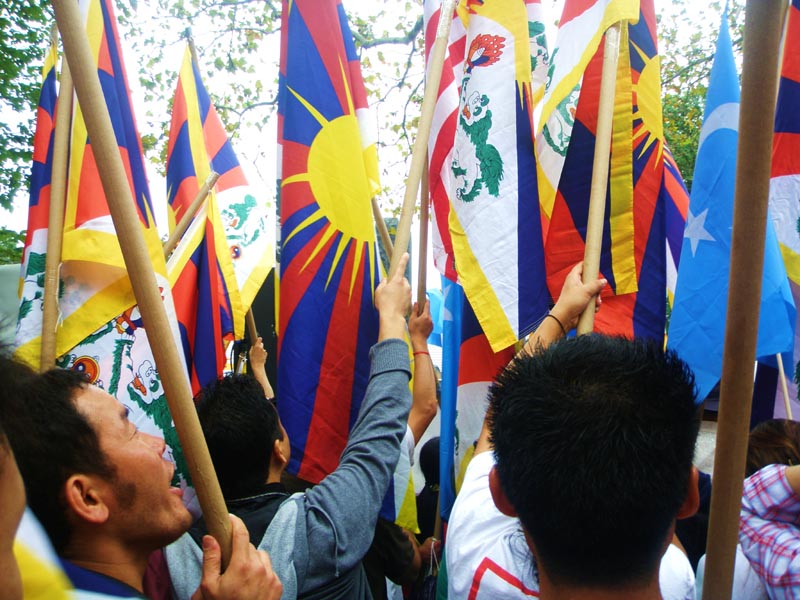 Dharamshala: Exile students of East Turkistan or Uyghurstan have this week voiced their support for the Tibetans during their current protests over language restrictions. This comes after over a week of protests by Tibetans, through-out the region and also in Beijing. So far over 9,000 people have demonstrated over the educational reforms in Amdo, which will see all classes taught in Mandarin instead of the native Tibetan.

The Uyghur's have experienced similar erosions of their language as the Tibetans by the Chinese government. The policy began in the 1990s with the elimination of Uighur as a medium of instruction at the university level. In 2006, the authorities initiated policy measures that are making Chinese the primary medium of instruction at the pre-school level. Students and teachers in a town in southern Xinjiang reported that they would be fined if they said one word in Uighur while on school premises.

Although China has attempted to block information about the demonstrations on the internet, details about the protests are still getting through. One student from Xinjiang told The Tibet Post "The local government is controlling the university websites and news about the Tibetan protests in Qinghai but we have already received information from our friends in inner-China about the protests there and at Beijing National Minorities University."

"But right now, every university is tightly restricting the students in Xinjiang and also in inner-China. Even groups of Uyghurs who are studying in inner-China's ‘Xinjiang classes' are being controlled," he added.

Uyghurbiz.net, a popular website and online discussion forum for Uyghur issues, recently reported that nearly every student enrolled in special "Xinjiang classes" for Uyghurs in inner-China has been approached by school security and told to refrain from joining in any protests backing Tibetan language rights. It has also been revealed that parents in Xinjiang have received phone calls from school security staff warning them of the consequences of their children supporting the protests.

Ilham Tohti, an outspoken Uyghur professor at Beijing National Minorities University, and webmaster of Uighurbiz.net, said Uyghur students at his school have been eager to join in protests with their Tibetan classmates.

"From the beginning of the Qinghai protests, Uyghur students studying at my university were all supportive. Some students came to my office and said they want to protest with the Tibetan students, but I advised them that we can support them without protesting," Ilham Tohti said.
A teacher in Xinjiang told The Tibet Post, "Every Uyghur teacher and student is supporting Tibet right now, because we have the same problems here."