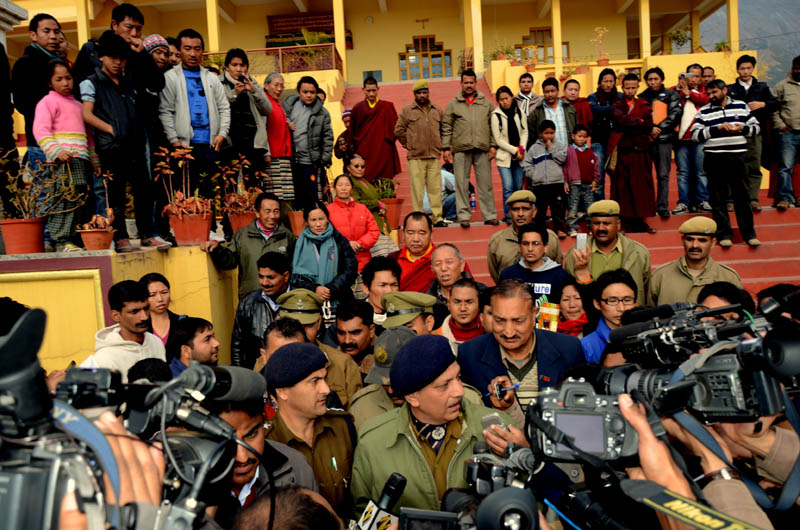 London: Tibet's spiritual and political leader His Holiness the Dalai Lama has come out in open to support 17th Karmapa Ogyen Trinley Dorjee. "Karmapa has been receiving offerings from disciples from all different parts of world including China. The money is the sum of those donations. This is not a reason to question his credential", His Holiness said.

His Holiness the Dalai Lama expressed his solidarity with His Holiness the 17th Gyalwa Karmapa Ogyen Trinley Dorjee, following a raid by Indian police at his monastery, Gomp Tsering. The police seized Rs 7 crore worth of donations and arrested a senior aide to the Karmapa, Rabjaychojan (also known as Shakti Lama). The money seized was in a variety of currencies, including a large amount of Indian rupees and Chinese yuan, which has led to speculation of illegal activities by the police.

Asked about the seizure, Karma Chunyappa, Deputy General Secretary of the Karmapa, asserted that the financial dealings of the monastery were transparent.

"Our lineage and His Holiness the Karmapa enjoy the love, trust and faith of millions across the world. We have a rich history of public service made possible through financial dealings that are entirely transparent. We will certainly answer all the questions that the press and public have but for now we request you to allow us to concentrate and comply fully with the investigations that are underway," the Karmapa Office of Administration said in their statement.

Penpa Tsering, speaker of the Tibetan Parliament-in-Exile has also expressed his solidarity with the Karmapa during these troubling times. He said that the money recovered was collected through huge donations offered by the followers of all over world and such offerings could not be refused as being a Buddhist spiritual leader. He said that the trust was not aware about the legal implications of keeping foreign currency with them so the Trust would now seek legal services from experts. He denied that there was any conspiracy angle in the case. The issues arising out of this matter to denigrate the reputation of Gyalwang Karmapa are completely baseless.

The Indian press, both printed and televised have used this incident to accuse the Karmapa of having links with the Chinese government and today the Karmapa's office issued a statement "categorically" refuting these allegations, calling them "grossly speculative".

"We categorically deny having any link whatsoever with any arm of the Chinese government," the statement said, adding, "any suggestion that these offerings were to be used for illegal purposes is libelous". The police have already questioned the Karmapa, along with many of his aides and followers.

An aide of the Karmapa, who did not wish to be named, said the money was from the monk's followers and that he had no role in its management. "All this money has been accumulated over the years, offered by devotees, followers of the Karmapa. The Karamapa's officials have clear-and-up to date records of the funds," he told AFP.

Tibetans in exile and Buddhist followers around the world have been visibly disturbed by the latest news, and say that the media speculations against their religious leader being a Chinese spy is "ridiculous" and unnecessary "sensationalism".

"We Tibetans are not traitors as some television channels are trying to portray; we have immense faith in our religious leaders from whom we learn virtues, not sins. And portraying our leader as a Chinese spy and traitor while the investigation is still going on is not responsible journalism," said Thupten Tsering, a monk at a local monastery in Dharamshala.

The investigation is on going and as subsequent raids and police question are set to continue, there seems little let up to the shell-shocked Tibetan community.