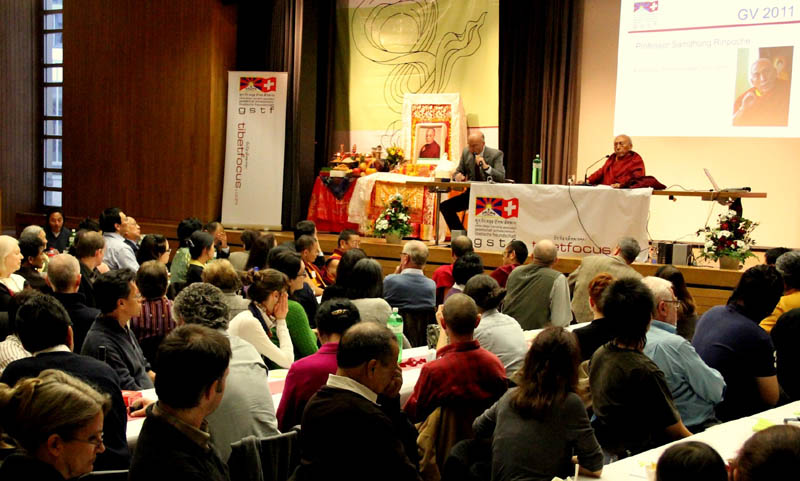 Dharamshala: The Tibetan prime minister (Kalontripa) Prof. Samdhong Rinpoche thanked Swiss people and government for sheltering thousands of exiled Tibetans who have been forced to flee their homeland Tibet over the 50 years. "Switzerland was the first Western country to invite a large number of Tibetan refugees for resettlement and these settlers have been the happiest among the Tibetan Diaspora...said Rinpoche who arrived in Zurich, Switzerland on 18 February evening.

"I take this opportunity to express our gratitude on behalf of 6 million people of Tibet to all of you and through you to the international community in general and people of Switzerland in particular," said Rinpoche, according to a report of Tibetan government official news agency "Tibet Net."

"We will never forget the kindness of Swiss people and government for their help offered when we were badly in need of it," said Prof. Samdhong Rinpoche. He was invited by The Tibetan Swiss Friendship Association and the Tibetan Community in Liechtenstein and Switzerland. In the afternoon, Rinpoche addressed Tibetan Swiss Friendship Association's Annual General Body meeting in Zurich.

The Tibetan exile community has been based in the the Switzerland since 1959, when His Holiness the Dalai Lama, their spiritual leader, escaped over the Himalayas following Chinese occupation over Tibet. Switzerland is home for over 4,000 Tibetan refugees but this figure was expected to grow further recent past years as family members reunite with the Tibetans who have settled in the country for the past many years.

The prime minister also spoke about the democratic system practiced by the Tibetans in exile and contribution of the Tibet Support Groups' to the Tibetan struggle and their relevance in the future.

The Tibetan Swiss Friendship Association was established in 1983 to foster closer relationship between the growing Tibetan community and the Swiss people. Rinpoche addressed a packed hall of Tibetan community in Liechtenstein and Switzerland members on 20 February morning.

The question and answer session covered several topics include Sino-Tibetan dialogue, Tibetan communities, financial and education affairs of the Central Tibetan Administration. Over 450 Tibetans listened to him initial address for about 20 minutes and followed by one and half ours of questions and answer session.