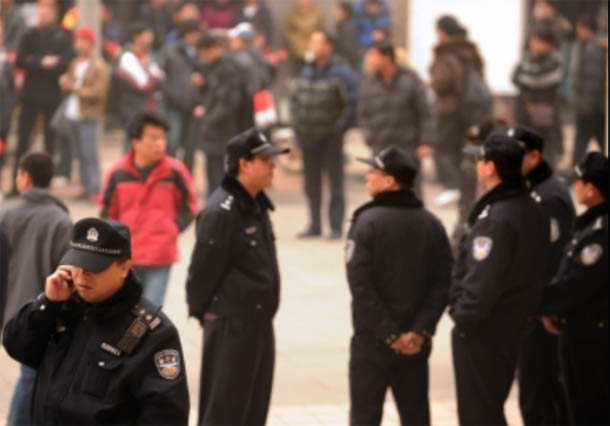 Dharamshala: Attempts to stage mass protests in China have again been thwarted by police, as hundreds of officers swarm the designated protest spots in Beijing and Shanghai.

In a similar fashion to the 'Jasmine Uprising' attempt last week, calls were made online for people to gather in the two major cities and protest against the communist regime. Authorities, however, had fenced off those areas -chiefly the McDonalds restaurant in Wangfujing, Beijing- and employed street cleaning trucks and rough physical force to prevent anyone from lingering.

At least five people have been taken into police custody in Shanghai, one for taking photos and the others for unknown offences, while members of the foreign press were 'manhandled' and news crews from both BBC and CNN were detained at a local police station in Beijing for trying to film what was happening.

Law enforcement authorities at Wangfujing, Beijing, reportedly beat press photographers and harassed journalists and bystanders and tried to prevent them from taking pictures or speaking to anyone in the crowd, though there were no obvious signs of protest and for the most part the large crowd gathered there simply seemed confused.

Tension has clearly been rising among officials in China following recent riots in northern Africa, as top members of the Chinese regime worry about similar uprisings occurring there and toppling them from power. Information on the internet and in the press is tightly controlled so as to keep the Chinese people in the dark, and the government is quick to crack down on dissent despite promises to curb its blatant disregard for human rights.

Internet searches for the words 'jasmine', 'Wangfujing' or the Chinese name of US Ambassador Jon Huntsman jr., who attended last week's jasmine protest, are being blocked by China's 'Great Firewall', and internet users are met with the message: "According to relevant laws and policies, search results cannot be shown".

With such a show of force at the anticipated protest sites, nobody dared do more than grumble quietly about the regime that has suppressed the Chinese people for the last 60 years.

However, despite the heavy controls on personal freedoms in Mainland China, protesters in Hong Kong demonstrated to show their support for those in China not able to voice their dissent, as well as their opposition to the 'corrupt' Chinese regime, holding placards that read "Freedom and Democracy. End One Party Rule. Push for Political Reform."

The last time a mass protest took place in China was in 1989 in Beijing's Tiananmen Square, with the brutal response of the government killing hundreds (some estimate thousands) of students. It seems the public has not yet gained the confidence of success necessary to try again.