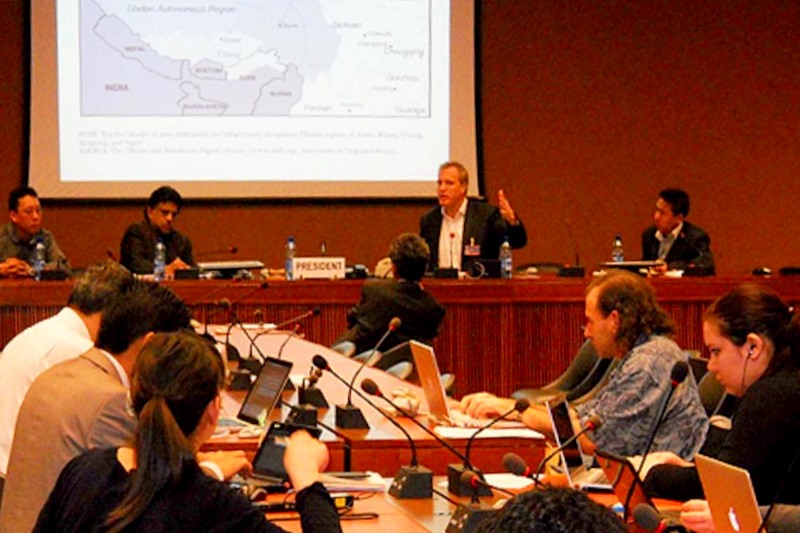 DDharamshala: The forced relocation of Tibetan nomads to urban centres is causing a wave of unemployment and leading to poverty for those inside Chinese-occupied Tibet, the 16th Session of the UN Human Rights Council in Geneva heard last Tuesday. The issue was addressed by Prof. Andrew Fisher, a senior lecturer at the Institute of Social Studies in the Hague and specialist on poverty and economic development, who expressed his concern during a briefing on the 'Human Rights Situation in China: Impact of policies on Tibetan Nomads'.

Fisher explained that Tibetans are in constant competition with Han Chinese migrants who are often better educated and who benefit from discriminative government economic policy, which harms Tibetans, and the Chinese government encourages them to integrate into Tibet, a policy that is causing the dilution and degradation of Tibetan society, culture and language.

The UN Human Rights Council's Special Rapporteur on the rights to food released a report in 2010 highlighting the difficulties suffered by Tibetans as a result of Chinese policy imposed upon them. Nomadic herders in Tibet and Inner Mongolian 'Autonomous Regions' are facing 'increasing pressure on their access to land', says the report. In the words of former political prisoner Jamyang Tsetrin Gyaljong from Amdo province in Eastern Tibet, "The Chinese are forcing a change on traditional way of life of Tibetan nomads without any proper planning for both the older and younger generation."

The official state-run Chinese Xinhua news agency published a report on January 17, 2011, quoting Chinese-appointed governor of Tibet Padma Choling as saying that around 300,000 families and a total of 1.3 million Tibetan nomads and farmers had been forcibly resettled in housing by Chinese authorities. By 2013, 185,500 more are expected to be put into settlements. Mr. Miloon Kothari, former UN Special Rapporteur on the right to adequate housing, explained that the forced evictions and urban resettlement was causing marginalisation of minority groups, particularly Tibetan women and children.

The recent Council meeting mirrored a report released in 2002 for the UN World Summit on Sustainable Development, which found China's economic policies for Tibet to be guided by 'systematic economic discrimination' and in violation of fundamental human rights principles. The report, titled 'Poverty by Design: The Economics of Discrimination in Tibet', highlighted the way that the state-controlled Chinese agenda has been 'superimposed on the Tibetan, non-industrial agrarian economy', with exploitation taking precedence over investment in social welfare services. The report exposed the Chinese intention to flood Tibet with its own ethnic Han population by revealing that workers were being lured to the region with subsidised salaries around 46.9% higher than anywhere on the mainland, receiving school-fee waivers not available to the local Tibetan population. The Canada-Tibet Committee, who wrote about the report's findings, said the report revealed that 'China's economic policies are reinforcing poverty, inequality and underdevelopment in Tibet'.

During last week's 8th March UN Human Rights Council discussion, Germany called on China "to guarantee freedom of opinion and expression in its minority regions, in particular in Tibet and Xinjiang, together with the protection of all human rights it has committed to as an international obligation." The representative of the EU, Hungarian Ambassador Andras Dekany, also reaffirmed the EU's support for minority groups and the need for all nations including China to abide by their domestic constitutions and international standards.

Sweden was also worried by set backs in the development towards the rule of law in China, by the harassment of human rights defenders, the extensive use of the death penalty and the infringements on the freedom of expression and assembly. Criticism of China's systematic violation of freedom of opinion and expression were also made by other representatives, who pointed to the fact that China and Iran spearheaded the list of most imprisoned journalists worldwide. Reporters Without Borders considers the two nations as the world's top violators of internet freedom, with China's Great Firewall being the world's most consummate censorship system.

In reply to Germany's accusations, and those of Sweden and the Czech Republic, Xia Jinge of China refuted claims of human rights abuses in China and in turn criticised the accusers of not being 'objective or fair', telling them to pay attention to their own human rights situations. He claimed that minorities in China had all of their political rights guaranteed and that their culture had been protected and their living conditions improved.

However Yang Jianli, a former political prisoner and representative of United Nations Watch, called on the United Nations to speak out against the Chinese government's recent crackdown on 'Jasmine Revolution' demonstrations, following which many people had been arrested or disappeared, and called for the release of imprisoned Nobel Peace Prize winner Liu Xiaobo.

Speaking on behalf of the Society for Threatened People, Tenzin Kayta noted widespread protesting across Tibet since 2008, saying that Tibetans had suffered immensely from the Chinese security forces crackdown, extrajudicial killings, arbitrary and secret detention, forced disappearances, torture and custodial deaths, denial of legal rights and harsh sentences from partial juries. He criticised measures such as the death penalty and said that Chinese authorities did not tolerate any expression of Tibetan aspiration, and that the reality of Hu Jintao's 'harmonious society' for Tibetans was a climate of fear, intimidation, domination and suppression.

Criticism also came from International Fellowship of Reconciliation representative, Jampa Monlam, who expressed concern for the 800 people detained illegally in Tibet (though actual figures are undeniably much higher), saying that any activities by Tibetan people were considered by the Chinese authorities as illegal. Making reference to Article 25 in the Constitution of the People's Republic of China which guarantees the right to be critical of any organ of the state, he pointed out the fact that this was not possible in Tibet and that such grave problems needed to be addressed.

On all counts China refuted accusations from several countries and organisations on human rights abuses in Tibet and the Mainland, maintaining that with the premise of obeisance of State law it promoted and protected the principles of human rights and saying that 'naming and shaming' would not solve anything.

The exposure of the situation in Tibet by the Council was not well accepted by the delegation of China, who has come under fire recently for increased restrictions in the occupied region of Tibet and for clamping down on dissent and cutting back the foreign press freedoms it introduced for the 2008 Beijing Olympics.