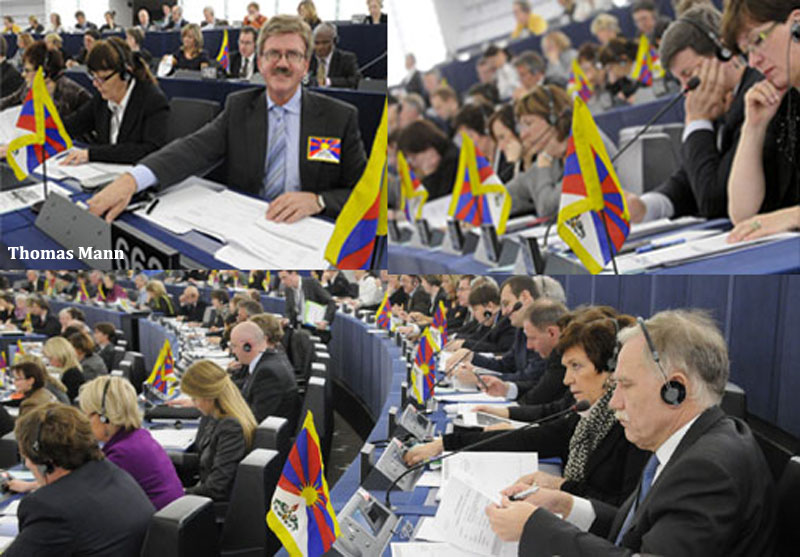 Dharamshala: - The European Parliament has adopted a resolution on the government of Nepal to respect the democratic principles and human rights of the Tibetan refugee community living in the Himalayan region. On 7th April, in Brussels, the capital of Belgium, members of the parliament expressed their concern and condemned the growing influence of China in the internal affairs of Nepal.

"Freedom of speech and the right to vote are universal human rights, and Nepal must allow the 20,000 Tibetans in the country to exercise their right to vote for their government in exile", said Thomas Mann.

The resolution adopted by the European Parliament calls on the Nepalese government to respect the voting rights and freedom of speech of this community and to refrain from preventive arrests. It urges the authorities "to resist the strong pressure exerted by the Chinese government to silence the Tibetan community in Nepal by using restrictions, which are illegal under domestic and international law".

Furthermore, it urges the government of Nepal to include these basic rights as well as the freedom of religion in the country's new constitution, due to be enacted by 28 May 2011. "The EU's High Representative for Foreign Affairs, Catherine Ashton, has to confront the governments of Nepal and China with this question", Thomas Mann added.

The resolution also condemns the living conditions experienced by the families of many recent detainees as well as the increased surveillance and restrictions on foreign reporters in China. MEPs are also expected to raise these issues in the next EP-China inter-parliamentary meeting. The resolution argues that Parliament's participation in that meeting should be conditional on prison access for MEPs, so that they can meet some of the detainees mentioned in the resolution.

Parliament also asks EU Foreign Affairs High Representative Catherine Ashton "to continue to raise the issue of human rights violations at the very highest level". "The development of EU-China relations must go hand in hand with the development of a genuine, fruitful and effective political dialogue" and "respect for human rights should be an integral part of the new framework agreement which is now being negotiated with China", believe MEPs.

In November 2010, the EP condemned China's one language policy in a resolution highlighting the ban on Tibetan language in Tibet. "Article 4 of China's Constitution and Article 10 of the Regional Autonomy law guarantee the freedom of all peoples to choose and develop their own language - spoken and written. The EP will ask the Chinese Government to ensure that Tibetans can continue to exercise this right in the future."