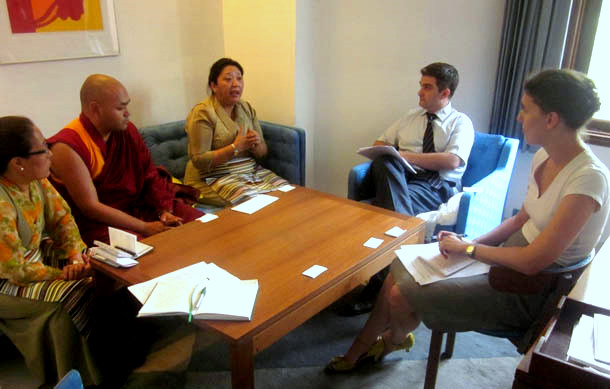 Dharamshala: - Three MPs - Mr Kalsang Gyaltsen, Ven. Sonam Temphel and Mrs Tsering Youdon - were part of the delegation. In a letter addressed to the ambassadors of various Embassies, the delegation sought for visit of fact finding delegation to Kirti monastery in Ngaba in northeastern Tibet to help restore human rights and normalise the situation.

As the tension in Ngaba region of Tibet continues, the delegation from the Tibetan Parliament-in-Exile headed by Deputy Speaker Dolma Gyari have approached the foreign embassies in New Delhi for their help to diffuse the crisis.

The foreign governments were also requested to support free and independent media to visit Ngaba and other parts of Tibet.

The delegation also called on the governments to urge the Chinese government to release the detained monks and allow the monastery to carry out their religious activities.

It was also mentioned in the letter regarding the continual violent repression on the Tibetans by the Chinese authorities. The letter said: "Arbitrary arrests, torture and death of Bulug of Jomda region in Dege on 25 March 2011 and death of Jamyang Jinpa from Amdo Labrang in Tashikyil on 3 April 2011 are some of the recent testimonies of death as a result of inhumane treatment by the Chinese authority."

The delegation expressed deep concern about military blockade imposed on the monastery, which has virtually turned the monastery into a jail. The delegation strongly disapprove it as the most undemocratic and uncivilized action on the part of the Chinese authorities.

"The Tibetan people's freedom of religion is threatened and their human rights grossly violated with over 300 monks forcibly taken away by the para-military forces to some unknown locations," the delegation said.

"...the government authority instead of listening to the grievances of the people continues to use force and suppress the people", they added.

The foreign Embassies expressed their deep concern about the sufferings of the Tibetan people in Ngaba and assured their full support to bring an end to the repression.

The Bureau of His Holiness the Dalai Lama and the India-Tibet Co-ordination Office in New Delhi jointly arranged the delegation's meeting with the foreign Embassy officials.

The Core Group for Tibetan Cause, India, met with the Tibetan Parliamentary delegation to discuss the Chinese government's repression on Kirti Monastery in northeastern Tibet.

Mr Jaswant Sinha, former foreign minister of India, expressed his deep concern about the prevailing situation in Tibet and extended his full support for the Tibetan people.

The Core Group for Tibetan Cause will observe ‘A day of Kirti Monastery' in different parts of India to mark the death of Phuntsog, a monk of Kirti Monastery, who set himself on fire on 16 March 2011 to protest the Chinese government's brutal repression on the peaceful protests which shook Tibet in 2008.