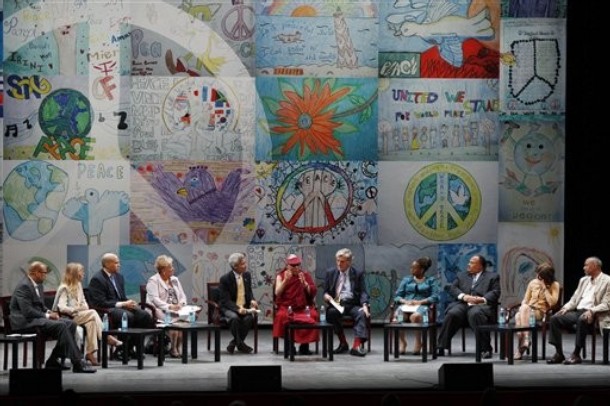 Newark, New Jersey, USA, 13 May 2011 - On the morning of May 13th, Tibet's spiritual leader His Holiness the Dalai Lama left for the New Jersey Performing Arts Center, the venue of The Newark Peace Education Summit, a three-day conference focusing on peacemaking practices from around the world.

The panelists discussed the need for inner peace and the role of society in bringing about peace in the community. Expanding on his view that inner peace was a critical component in bringing about world peace His Holiness said that scientific findings indicate that individuals who are compassionate, truthful and sincere bring about a happy family atmosphere. He said warm-heartedness brings about trust and trust engenders happiness. He said there are negative outcomes when an individual lies or is hypocritical and that when a person is too polite, suspicion is created.

His Holiness joked to the audience of more than 1200 that they could consider him a "small Buddhist psychologist" explaining that mind and emotion have many varieties. He suggested that educational institutions should undertake more detailed study of the mind.

Participating in the discussions after hearing from those individuals who had direct experiences of social injustices as well as wrongdoing in the past, His Holiness said these indicated that the potential of doing negative and positive actions were present in everyone. He said through knowledge and education can positive thinking be inculcated and suggested that there was something lacking in modern education. He called for the incorporation of the teaching of inner values in the school education.

Following the morning session, His Holiness departed for the Newark Museum, which is celebrating the 100th year of its internationally acclaimed Tibetan collection. According to the Museum, "Since the first 150 Tibetan objects were displayed here in 1911, the Newark Museum has become a steward of one of the foremost holdings of both secular and religious Tibetan art in the world. Today the collection numbers over 5,500 objects that range from the eleventh to the twenty-first century and is the largest and most important repository for Tibetan art in the Americas." The Museum is currently in the midst of a nine-month Tibet Collection Centennial celebration, which began in March 2011, honoring Tibetan art, culture and history.

His Holiness said a prayers before an Avalokitesvara sand mandala that monks from the Drepung Gomang monastery had constructed in the museum and then went through the exhibits, which included statues, Tibetan painted scrolls, dress ornaments and other religious artifacts.

In the afternoon, His Holiness attended a luncheon where Newark Mayor Cory Booker made some introductory remarks. He praised His Holiness as "A Man who is from a specific cultural and geographic context and yet has transcended that." The Mayor termed His Holiness' visit to Newark was a pivotal achievement of his Mayorship. The Mayor talked about the need for persistence in achieving peace.

In his remarks His Holiness thanked the Mayor for his meaningful remarks. He suggested that there have been many such meetings on peace in the past and feels that there is something special this time. He, however, said speeches alone were not sufficient and urged the people to think of how the spirit of the summit could reach the masses saying educators could be involved in this. Such an approach will encourage the generation of conviction that we all have the potential to create a happy society.

Earlier, while conveying his feeling about meeting His Holiness, Mayor Booker told the media, "I wouldn't call it nervous. I would call it a sense of anticipation. He is someone who's books I have read and such an emissary of peace and justice. It's just an extraordinary opportunity for Newark."

His Holiness then went to participate in the afternoon session of the summit, which was on "Peace in the Home." His co-panelists for this session were Nobel Laureates Shirin Ebadi and Nobel Laureate Jody Williams; Nancy Black, who provides training in child and adolescent psychiatry; David Kerr, who provide substance abuse treatment and support services in Newark; Somaly Mam from Cambodia who rescues women from brothrel; Marian Schreck who runs a therapeutic community for the prevention and treatment of substance abuse; Sam Tsemberis, who provide housing and support services to the homeless; Lavar Young, who runs a program to provide Newark residents with support to transform their neighborhoods; and Yvonna Wade, a youth representative.

His Holiness subsequently took part in the discussion. He said he was moved by the experience of people who have been in the forefront of campaign against such social problems. He said that it was important that more people know their stories in order to give them hope.

The summit is organized by Tibet House U.S. and a foundation run by Mr. Drew Katz, a philanthropist and longtime supporter of anti-crime efforts in Newark in New Jersey In a message about the summit, Prof. Robert A.F. Thurman, Summit Co-Convener, said, "When His Honor Mayor Cory Booker invited His Holiness to bring his inspiration to Newark, to empower the turnaround the Mayor is leading - from hopelessness to hope, from violence to dialogue, from confusion to education, and from oppression to opportunity - His Holiness was enthusiastic to make his contribution to that noble effort, while learning from the hard working people of Newark how they are struggling to better their lives and the lives of those around them.

His Holiness participates in two panel discussions at the summit on May 14, 2011