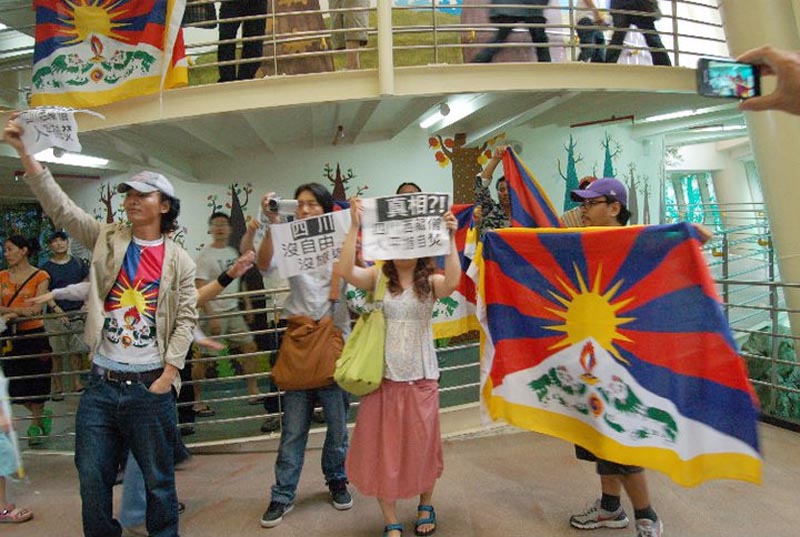 Dharamshala: On May 22, Tibetans and Taiwanese supporters of the Tibetan cause staged a demonstration at Taipei Zoo as the Governor of the Chinese Sichuan Province, Jiang Jufeng paid a visit to the zoo in the afternoon.

Expecting Jiang to enter the zoo's Panda Hall, where a pair of pandas transferred from Sichuan to Taiwan in 2008 are being kept, the demonstrators held up Tibetan flags and signs reading "No freedom, no tourism in Sichuan" and "Release the 300 monks from Kirti Monastery," while shouting "Free Tibet" and other slogans.

"We are here to ask him [Jiang] to release 300 monks arrested from the Kirti Monastery and to allow a Tibetan Youth Congress delegation to visit the prisoners there," said Tenzin Chompel, president of the Regional Tibetan Youth Congress, Taiwan. "Part of Jiang's mission here is to promote tourism in Sichuan, but without freedom, there's no tourism."

Conflict broke out late last month when Tibetan residents and monks in the predominantly Tibetan region of Ngaba, Sichuan Province, faced a violent crackdown in response to peacefully demonstrating in March to commemorate the Tibetan uprisings against Chinese rule in 1959 and 2008.

As a result, hundreds of monks from the Kirti Monastery who participated in the demonstration were arrested and the monastery was locked down, while all foreign visitors have been banned from entering Ngaba.

Kelsang Lhundup, another participant at yesterday's protest, said that as the top leader in Sichuan Province, Jiang should be held responsible for what has happened to Tibetans there and should solve the matter peacefully before he visits other countries.

According to the Taipei Times, revealing their surprise demonstration, the demonstrators accidentally unveiled their signs and flags too early as they mistook a bus with Chinese journalists for the convoy of Jiang, who arrived on Saturday at Kaohsiung International Airport with a delegation of about 50 for a seven-day visit.

A second wave of protests broke out when Taipei Mayor Hau Lung-bin showed up at the entrance gate to the Panda Hall in preparation to greet Jiang.

The protests forced organizers of the visit to change their plans. Instead of entering the Panda Hall from the front door as planned, Jiang entered through the cargo entrance at the back, took a look at Yuan Yuan in a nursing area that is not open to the public, and went up to the briefing room on the third floor via the emergency stairs. He left directly from there.

But the cat-and-mouse game continued for another round as the demonstrators, reacting to the change in plans, moved to the only vehicle exit at the zoo and protested as Jiang's convoy departed.

Although given a VIP treatment by the Zoo's staff and administration, Greater Kaohsiung officials were absent and only a group of girls from a panda fan club greeted the delegation. A large contingent of security personnel from Sichuan maintained Jiang's safety, but no additional security measures were taken.