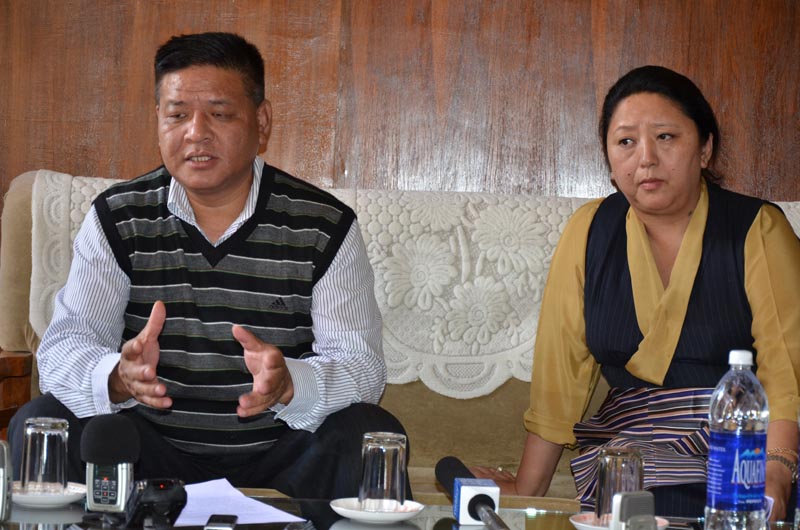 Dharamshala: - In a press conference marking, the 60th anniversary of the signing of the 17 point agreement between the people's republic of china and Tibet, the speaker of the Tibetan parliament in exile Penpa Tsering la and his deputy Dolma Gyari reiterated the need for the world community to focus its attention on the Tibetan issue.

Penpa Tsering la said that "His Holiness the Dalai Lama made utmost efforts to uphold the agreement despite the fact that Tibetans were coerced to sign it. But the Chinese government violated it by using brute force to bring about systematic annihilation of every vestige of Tibet and Tibetan people's identity. The unprecedented National Uprising of Tibetans against the Chinese government's repression in 1959 was the last straw which led to the massacre of tens of thousands of Tibetans and the exile of His Holiness the Dalai Lama."

He went on the say that the Chinese governments propaganda on the state of Tibet before 1959 was exposed when in 1980, the then Communist Party Secretary, Hu Yaobang after witnessing the extent of poverty in Central Tibet stated that the living standard should be brought up to the pre-1959 level.

The speakers then demanded that if Chinese claims of rapid development in Tibet and happy life of Tibetans were in fact true, then in response to the reports of the ongoing violations of Human Rights inside Tibet and in particular at the Ngaba Kirti Monastery, China should have no problem in allowing the international media and fact finding missions to Tibet.

The anniversary of the signing of the controversial 17 point agreement coincides with the meeting of the 2nd Tibetan general meeting of 2011.Dicussions are being held to highlight the amendment of Article 19 of the Tibetan charter which the political responsibilities of the Dalai Lama are mentioned. Following His holiness The Dalai Lama's decision to step down as political head of the Tibetan administration, the need for smooth transfer of responsibility to the various authorities in the Tibetan government in exile became apparent.

The speaker said that, discussions and deliberations on the text for the amendment of THE Draft Preamble ‘Article 1' would conclude by today evening, the proposed amendments would then be presented to the general Plenary of the general meeting, after which on the day after, an audience would be requested with His holiness to seek his approval of the changes.