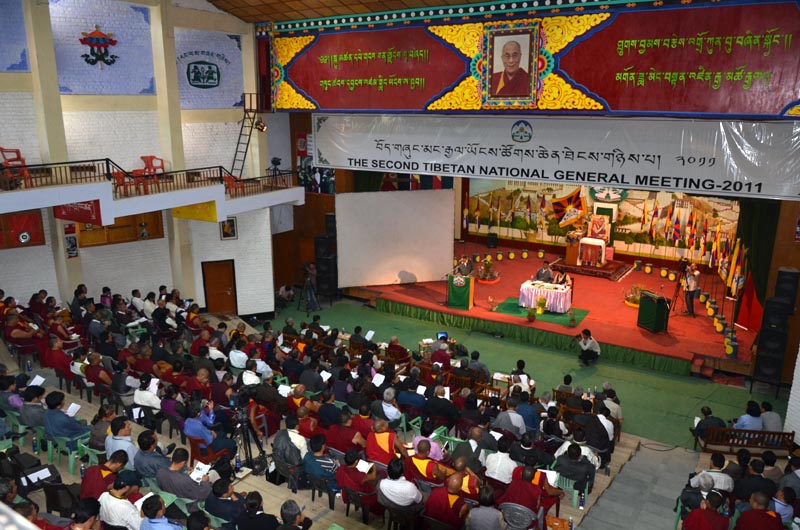 Dharamshala: The Second Tibetan National General Meeting today came to an end after three days of intense deliberation. 10 working committees had been formed to scrutinize and suggest changes to the amendments as proposed by the Amendment Drafting Committee of the Tibetan Parliament in Exile and at the forefront of the meeting's conclusions stood the unanimous wish of the delegates and the current Kalon Tripa's administration to request His Holiness, the Dalai Lama to assume the role of ceremonial head of state.

The proposed amendments have been suggested in an attempt to accommodate His Holiness, the Dalai Lama's wish to step down as the political leader of Tibet, but while His Holiness has repeatedly expressed his firm belief that he should not be involved in politics any more, the general meeting's representatives still opted for proposing that he stays on. If His Holiness accepts to remain at the helm of the Tibetan Government in Exile (TGiE), the parliament will then have to define his new ceremonial role.

The speaker of parliament, Mr. Penpa Tsering, in a press briefing shortly after the meetings conclusion, said that the decision had been unanimous and that the new preamble to the existing charter will be included with minimal changes. In case the Dalai Lama does not accept the request of the general meeting, however, the preamble will instead include the proposed "article number one" which defines His Holiness, the Dalai Lama as purely the spiritual and symbolic leader of the Tibetan people.

"Tomorrow around 12 o'clock we will be approaching His Holiness the Dalai Lama with the request that he accepts the proposal to be the head of the state and just in case his holiness does not accept that, then we request him to accept the insertion of the preamble and the article number one" said Penpa Tsering and added that the many views of the working committees on the amendments to other parts of the charter would be synthesized and brought to the parliament to be decided upon when they meet on May 26.

"By the end of this month or by the beginning of next month we expect His Holiness, the Dalai Lama to render his final signature and this could be in fact be the last that His Holiness would be signing" Penpa Tsering said, referring to the scenario of the Dalai Lama declining the proposed role as Head of State.

Towards the end of the meeting, the current Kalon Tripa, Prof. Samdhong Rinpoche, delivered a touching speech for which he received standing ovations from the delegates. "I take this opportunity to thank the general public from the bottom of my heart for their great support of the works of the 12th and 13th Kashag" said Samdhong Rinpoche and added, "I would like to urge the people to support the TGiE even more than before in the future, because at this time many changes occur simultaneously, and a fruitful outcome of these changes is the responsibility of every Tibetan."

Concluding the 4 day meeting, which was attended by 418 Tibetan delegates from around 30 countries, parliament speaker Penpa Tsering also appealed to the Tibetan community, "the newly elected Kalon Tripa and the members of the TGiE, might experience some nervousness in this present time of so many changes. Therefore it is of the utmost importance that everyone unites in one effort".

Among the amendments not directly regarding the role of His Holiness, the Dalai Lama, were proposals to change the term limits for the Kalon Tripa and his ministers and to remove any article regarding the centuries-old tradition of a regency council, which would rule Tibet in the years it took from the death of the Dalai Lama and until his reincarnation was deemed fit to assume his role as the supreme leader of Tibet.

As for the Kalon Tripa's current two-term limit (10 years), Penpa Tsering said that, "the general consensus that I got to know from the presentation of reports by the committees, is that the two-term limit for Kalon Tripa should be kept, whereas a minister who has served for two terms should have the opportunity to stand for the Kalon Tripa's post". The working committees also put forward a new suggestion to fix a limit on the term of the members of the parliament. "Right now there is no fixed terms, so they suggested that there should be a term for the parliament also" said Penpa Tsering.

The current 14th assembly is expected to give their final approval of the preamble and amendments on May 28, its last day in office. At the beginning of the general meeting, however, deputy speaker Dolma Gyari said, "As of now the 14th house will make every attempt possible to try to fulfil our duties, and if we fail, naturally then it will have to be carried forward by the 15th house".