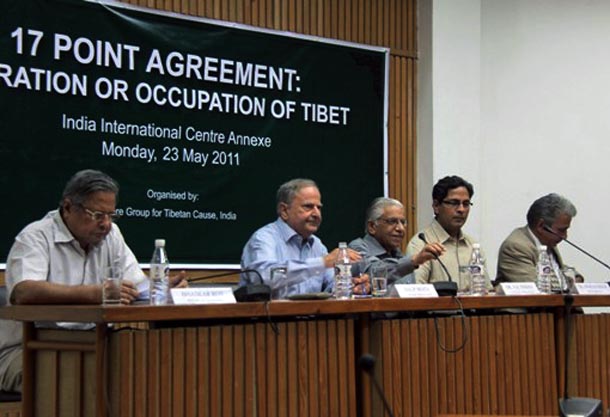 New Delhi: China has violated terms of an agreement it signed on 23 May 1951 with Tibet by denying the promised "national regional autonomy" to the Tibetan people in running their affairs apart from international relations and defence, concluded the speakers at a panel discussion titled 17-Point Agreement: Liberation or Occupation of Tibet held yesterday at the India International Center in New Delhi.

Speaking through the lens of contemporary strategic and military implications in relation to the rise of China as well as the gradual evolution of India as another rising power in Asia, Dr Swaran Singh said the Chinese approach to the Agreement was not so much an operative formulation than a military one. "Rather than political-ideological terms, this Agreement is more of a hard-headed military strategic approach," Dr Singh said.

Quoting the late Indian leader Sardar Patel who had said Chinese imperialism was cruder and more aggressive than any witnessed in Europe, Dr Singh said the clauses of the Agreement are "glaringly imperial and one-sided" defined more by Chinese irredentism. Further, he said the provision of not altering the political system of Tibet in Article 4 of the Agreement was China's way of deceptively reassuring the Tibetans as it was in the case of freedom of speech clauses contained in the former Soviet Union's constitution where the Proletariat classes were assured that institutions will be created to implement this clause with an implicit rider that people were allowed to shout as long the shouting were in favour of the Party.

Dr Singh said hopes for changes in Tibet and China lie in how Tibetans both in and out of Tibet find a "desirable and feasible" weapon to strengthen their movement. If the strength of Tibetan movement effectively employs the Gandhian way of people power, the 17-Point Agreement could be used in favour of the Tibetans, he said, adding the ongoing discourse on democratisation in China and the challenges the regime in Beijing faces in this regard could in the long run tilt the balance making this Agreement to be seen a new light and relevance.

Reacting to Dr Singh's comments, an audience member said the weapon of the Tibetan people is not only their indomitable spirit and non-violent methods but also the support of millions of people around the world who believe in the principles of truth, justice, and freedom.

Ambassador Mehta said the Agreement is not inconsistent with the Middle Way proposal of seeking genuine autonomy for Tibet by His Holiness the Dalai Lama and wondered why China demonises His Holiness when what His Holiness seeks is merely the terms of the Agreement China sanctifies. With the agreement left unimplemented in various forms, he said it only exposes the "complete hypocrisy" of the Chinese government.

Mr Bhaskar Roy touched briefly on the history of Tibet-China relations before the signing of the Agreement and termed the Chinese claim of Tibet being an "integral part" of China "flimsy". He said the Chinese ambans living in Lhasa before 1912 were Chinese representatives in the court of the Dalai Lama, and did not have the status of governors as claimed by China. Such historical manipulations are visible in current Chinese attitudes towards issues such as the South China Sea.

Mr Roy said the 17-Point Agreement was signed after the Chinese Communist forces had successfully attacked the Kham province of Tibet and controlled Chamdo, the provincial capital. Moreover, threats of force were used against the Tibetans into signing the document, he added, calling it the "worst kind of aggrandisement".

While there is no let-up in Chinese crackdown on Tibetans, a growing number of Chinese mostly intellectuals, activists, and lawyers have begun to question China's Tibet policy pointing out the glaring absence of autonomous powers for the Tibetan people. He referred to a 2008 report published by a Beijing-based Chinese NGO, the Gongmeng Law Research Centre, which, among others, stated that the money being spent in Tibet was not going to the Tibetans, but to the Chinese settlers.

Mr Roy said the dominance of hardliners in the Chinese leadership poses a great challenge, adding, even the late Chinese leader Deng Xiaoping -- in a rare gesture of extending the olive branch to His Holiness the Dalai Lama in 1979 to discuss all issues apart from independence -- couldn't stop the stiff resistance he faced from his hardline colleagues.

Speaking on the status and legality of the Agreement, Dr Naresh Mathur said this agreement had not been tested in any international forum and most importantly, no recourse exists to ensure its implementation. Even the provision to set up a committee overlooking the implementation as enshrined in Article 15 of the Agreement has not been fulfilled yet. Alluding to the gross violations, Dr Mathur asked, "If it is honoured in breach, what sort of agreement are we talking about?"

But the question of breach, Dr Mathur said, should also be viewed in tandem with Article 1 and 2 of the Agreement wherein some wordings such as "Tibetan people returning to the great motherland" suggest Tibet was a part of China before 1951. This, when independent international jurists including the groundbreaking 1959 report prepared by International Commission of Jurists, had recognised Tibet as an independent nation from 1912 to 1951.

Dr Mathur said even Britain had recognised Tibet as a "sovereign independent nation" for 94 years before British foreign minister David Miliband under the Gordon Brown government reneged in 2008 by abandoning the suzerain status it bestowed on Tibet at the 1914 Tripartite Simla Treaty, participated by the plenipotentiaries of Tibet, British India, and China. With the subsequent Chinese disavowal to execute the treaty, the tripartite agreement ended up as bipartite, he said, and China lost the concessions it received as having suzerain power on Tibet. In totality, the legal effect is an absence of the suzerainty element which in other words means the presence of sovereignty, he added.

The discussion was organised by the Core Group For Tibetan cause, an apex coordinating body of all the Tibet support groups in India. Dr N K Trikha, the National Convenor of the co-ordinating body gave the opening and closing remarks at the event.