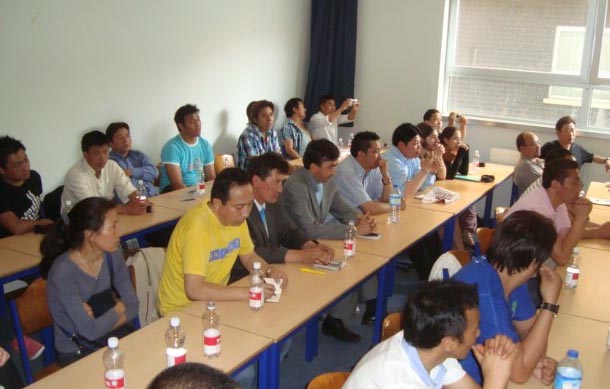 Dharamshala: - Chinese human rights activists, former Tiananmen students and survivors of the massacre, Tibetans, Uyghurs and western supporters on Saturday 4th June joined hands together at the University of Brussels, Belgium to commemorate the 22nd anniversary of the Tiananmen massacre in Beijing, all paid tribute to the victims of the CCP regime. Interesting and inspiring discussions were also held during the event.

First flowers were laid at the monument and the memorial by Chinese, Uyghurs, Tibetans and supporters, and the victims of the CCP regime and Tiananmen were commemorated with one minute of silence. After that, the Chinese freedom song "You and me, back to Tiananmen" was performed by Mona Zhimin Tang, this was followed by Tibetan prayers.

According to a joint statement which was released after the event, Chinese democrats and human rights activists, Tibetans, Uyghurs and westerners have commemorated the Tiananmen tragedy in a beautiful, touching and modest way. They paid tribute to all the victims of the CCP regime.

Afterwards the group went to a room in the university for the discussions. Representatives of different groups and organizations gave speeches. After the meeting the participants were offered Tibetan momos (dough with a filling that is steamed) in the park of the university. The group went to the Chinese embassy in Brussels to support the Tibetan hunger strikers. From Tuesday 31st May until Sunday 5th June a group of about 15 people were on hunger strike there. Each day another group went on hunger strike for 12 hours to raise attention to what's happening in Ngaba in Tibet.

Lobsang Wangdu, President of the CTFSE, welcomed everyone and expressed his appreciation for the people of all kinds of nationalities and different countries who came specially to this event:

"Minorities as the Tibetans and the Uyghurs suffer very much because of the oppression by the Chinese government, so it's very important to stand together and to be strong." "We must never forget what happened on 4th June 1989 in Beijing." "After the CCP dictatorship everyone would be free, even a fly," said Lobsang Nyima, representative of the Tibetan government-in-exile who is based in Switzerland.

Jian Zhang who lives in Paris (France), a former Tiananmen student said that before 1989 there was an even bigger massacre in Tibet, many students came together in 1989 to protest against the CCP. "I'm very grateful for the western supporters, like the people from Belgium and The Netherlands who are here today. Thanks a lot for your support. Support from the West nations, could probably be our last straw to stop the CCP." he added.

Rigzin Choedon Genkhang, who is the representative of the Office of Tibet in Brussels, referred to the present situation in Tibet now, especially in Ngaba and Kirti monastery. "55,000 military are based there now. On March 16 the Tibetan monk Phuntsok set himself on fire as a call for more freedom in Tibet and he died after the Chinese beat him after they extinguished the fire. The monks started a large protest and two elderly people died. They were beaten to death by the Chinese. As the whole world is looking at North Africa (Egypt, Libya...) we should not forget Tibet and what's happening now in Ngaba and the Kirti monastery," she added.

"The CCP prosecutes common Chinese people, so in fact China is occupied by the CCP. I want to emphasize that the CCP is not China, this difference is very important. The Chinese people are brainwashed by the CCP. The Mongolian people are discriminated against by the Chinese as well, me too, as I was born there, even-though I'm a Han Chinese. I understand the oppression and discriminations very well, also what the Tibetans experience." "Now there are also protests in Mongolia, so please don't forget Mongolia," said a Chinese human rights activist who escaped from China recently.

Tsaye Kelsang, President of the Tibetan Community Belgium, gave a short speech. He showed much respect for everyone who came today and also to the former Tiananmen students. He said it's very good to be here all together and to share our common goals.

At the end of the discussion, the Chinese dissident of AntiCCP International who escaped China recently wanted to add something important. "70 million people in total were killed during the First and the Second World War, but 80 million Chinese in China were killed by the CCP from 1949 to the eighties. Most of them were intellectuals."

The commemoration was organised by the Chinese-Tibetan Friendship Society Europe (CTFSE) which based Brussels, the capital of Belguim, 55 people from various groups and NGOs in total participated.