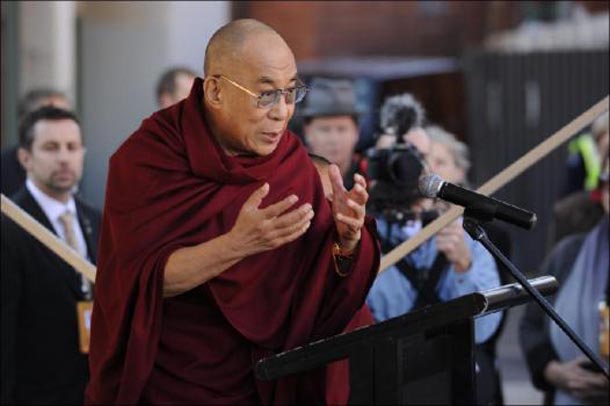 Dharamshala- His Holiness the Dalai Lama of Tibet sees positive signs of change within China, he revealed this week. He divulged in an interview in Australia that he hears more voices for freedom from within China, and that the regime's repressiveness "cannot last forever."

There is barely a person in the world who watches the situation in China more closely than H.H. the Dalai Lama. His gaze on the region - which includes his native country of Tibet, is unending. The comments that he made this week upon a visit to Australia hold a gravity that even those in Beijing could not ignore.

His Holiness says that he sees increasing numbers calling for freedom within China - not just from his homeland of Tibet. The region has seen a growing number of crackdowns in recent months; particularity with violent scenes in Kirti Monastery, Ngaba county, eastern Tibet.

"Now voices about change, the necessity of change, now quite often you can hear, including Prime Minister Wen Jiabao," he told the Sydney Morning Herald.

"Now more voices for democracy, freedom and openness and even PM also has spoken of these things."

The 76-year-old Nobel peace laureate continued to stated that the more educated, global community of the world had created a sense of individual freedom that people needed to enjoy. Regarding the situation in China, and the suppression that people face in the region, he stated:

"This kind of attitude cannot remain forever". He added that, "Naturally, even animal[s] want freedom. So therefore human being[s] naturally have desire of individual freedom. No force can stop that."

The spiritual leader of Tibet also saw some promise in China's attitude to Tibet: "Over two years we notice about 1000 articles in Chinese language wrote by Chinese - all these articles fully support our middle-way approach, not seeking independence but seeking genuine meaningful autonomy."

In recent weeks His Holiness the Dalai Lama of Tibet handed over all political power to the democratically elected leaderships including Dr. Lobsang Sangay, in a historic change for the shifting role of the Tibetan leader. He now officially stands as the spiritual leader of Tibet, and his role continues to involve a large number of state visits giving inspirational speeches such as the one witnessed in Melbourne last week.

His words come during a short tour of Australia, and gives hope to those concerned with the growing suppression in the Himalayan region of Tibet.