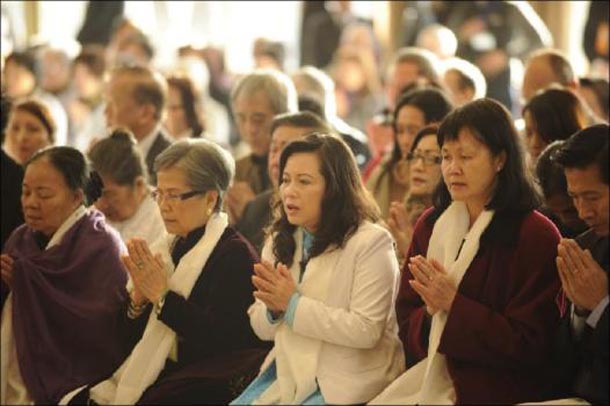 Melbourne: His Holiness the Dalai Lama on Saturday morning delivered a stirring message to thousands of followers in Melbourne, saying that while money may provide temporary material happiness, the key to true inner peace lies with Compassion and affection.

During his talk on the true meaning of happiness, His Holiness advocated forgiveness, tolerance and patience; also claiming that the frustration and loneliness suffered by mankind was caused by the replacement of affection with greed, and that the way to create a happier world than the one we live in was to bring back that affection to society.

He also spoke of the importance of instilling sound morals in our children "from kindergarten to university", asking his Australian audience to "please raise the next generation compassionately". In a televised interview with popular '7pm Project' presenter Dave Hughes on Tuesday night, the Dalai Lama also said that though his life was busy it was 'meaningful busy', and that made it worthwhile.

His message was well received by the people of Melbourne, who evidently found great comfort in his words. One audience member, a soon-to-be father, told journalists the experience had given him confidence for the future of his children, and that he hoped "to give my child a lot of affection and put them on a journey that they'll learn a lot from." In regard to the Dalai Lama, the man added that "he is a person that always transcends religion ... the things he says aren't just strictly from a Buddhist perspective, they're from humanity's perspective."

Wasting no time, Tibet's spiritual leader then gave an address on refugees to a 650-strong crowd at a Press Club lunch at the Melbourne Conference and Exhibition Centre, during which he stressed the importance of democracy as "the best system" of governance and told the crowd "eventually I think...change will come. So we refugees from the totalitarian system we have plenty of reasons to be optimistic."

The event also hosted four refugees from Burma, Eritrea, China and Vietnam, now residing in Melbourne, who told their stories. The Dalai Lama's speech was received as "a message of hope to all refugees."

His Holiness is in Melbourne for the Queen's birthday long-weekend and will be delivering teachings before heading on to the nation's capital of Canberra where he will meet with members of parliament, Greens party leader Bob Brown and the leader of the opposition, Tony Abbott. He will then give teachings in Brisbane and Perth.

For those in Australia, further information and ticket booking for the teachings are available through the following website: http://www.dalailamainaustralia.org/default.aspx . His 11-day visit comes the month before the 'Walk for Tibet in Australia' event due to take place around the country on July 24th.