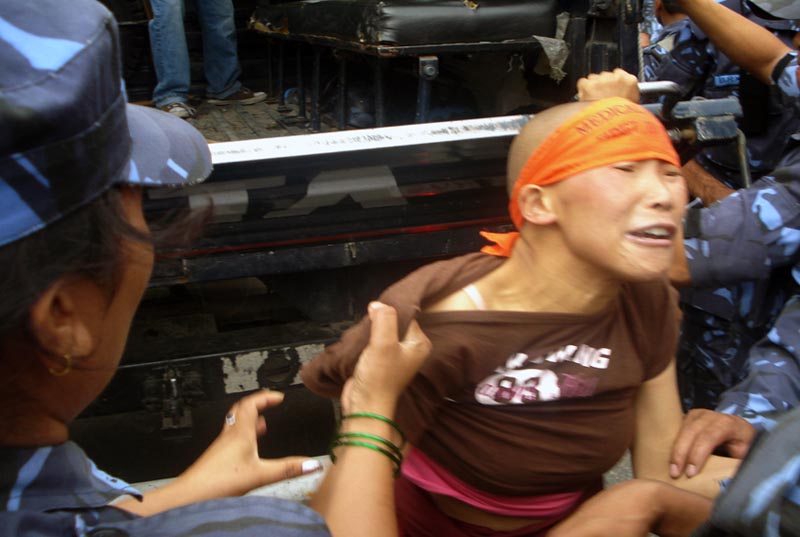 "A total 13 Tibetans were arrested when they came out the monastery after the ceremony," Tshering Nyima, a spokeswoman with Tibetan Youth Club, told AFP.

It is understood that all of the individuals arrested were male, and remain in custody in the Capital. This comes as disturbing news for activists and human rights groups, as the country has witnessed an increasing crackdown instigated by Beijing against Tibetan refugees fleeing the Communist regime. In March, during the democratic elections for the Tibetan Government in Exile, Nepalese Police trashed ballot boxes and voting systems to the horror of the international community. The Tibetans in exile in Nepal were thus rendered unable to vote.

Nepal acts as a corridor for fleeing Tibetan refugees, who seek refuge in India. Many seek the home of the exiled Dalai Lama in Dharamshala, in Himachal Pradesh, North India. This breach of human rights by Nepalese authorities this week will surely anger the International community. Only this month the United States expressed a wish for Nepal to honor its ‘gentleman's agreement', and allow the refugees safe passage to India.

The news of the human rights abuse comes amid news that there has been a new voluntary co-ordinator appointed in Nepal for the welfare of Tibetan refugees in the Himalayan republic this month. Thiley Lama, 55, was appointed by the Central Tibetan Administration, and is the first Nepali co-ordinator for the welfare of Tibetan refugees. Lama told TNN:

"Dharamshala has recognised the One China policy that acknowledges Tibet ," "We are urging all Tibetans in Nepal not to take part in any anti-China rhetoric or hold demonstrations before the Chinese Embassy in Kathmandu."

Nepal is home to around 20,000 exiled Tibetans, and is under growing pressure from Beijing over the Tibetan exile situation. Beijing has made clear it will not tolerate ‘anti-China activities'. Furthermore, the Chinese Government invests millions in Nepal with ‘Aid' packages. In March, China gave Nepalese military and weapons with a value of around US $ 20 million.