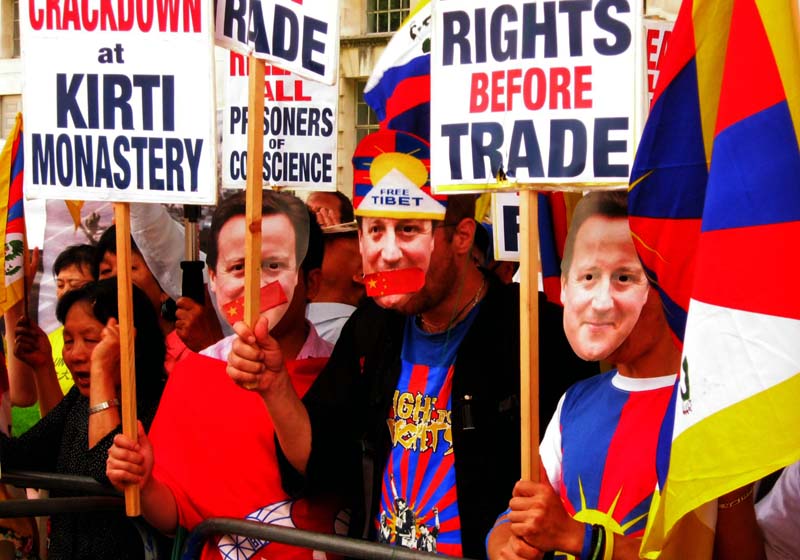 Dharamshala- Upon a visit to Britain by Chinese Premier Wen Jiabo, the British Prime Minister David Cameron raised the difficult issue of human rights in China, which has seen a growing number of breaches of international rights in recent months, particularly in Tibet.

The journey of Wen Jiabo through Europe has met a rocky reception in Britain. Upon arriving in London at the weekend, the Chinese Premier was met by Pro-Tibet campaigners, who have since followed him peacefully on his three day tour of England. Regarding the visit by Jiabo, Students for a Free Tibet stated:

"Wherever he travels, Wen Jiabao knows the Tibet issue will follow him, and David Cameron and the UK government must also know that they must put human rights before trade".

British PM Cameron used his words carefully when criticizing China's human rights, admitting that his own country was not perfect or a ‘monopoly of wisdom - or is the perfect society'. He stated that China provides a ‘huge opportunity' for British business, and it was announced on the visit that £1.4bn of trade agreements have been arranged between the two countries.

However, he re-iterated the statement he made in Beijing in November, that the human rights issue needs to be addressed, and that:

The best way forward is for ‘economic and political progress to go in step together'.

He added that political progress must go hand in hand with respect for human rights, which was ‘the best guarantor' for prosperity and stability.

In a well timed political move, and despite huge crackdowns across Tibet in recent months, China release political prisoner and world famous artist Ai Weiwei, followed closely by Hu Jia, both political dissidents, who are arguably the most outspoken critics of Beijing.

In response to Cameron's remarks, Jiabo pushed for ‘dialogue' over the issue, which he stated needed the correct facts [on human rights]. He also advised Britain ‘not to finger point'.

Mr Jiabo plans to retire in late 2012, and the business visit to Britain, followed by Germany, could be one of his last to Europe before exiting the political scene. Many are hoping for massive reform on Human rights towards the end of his term, however given Mr Jiabo's response to Britain this seems unlikely for the present.