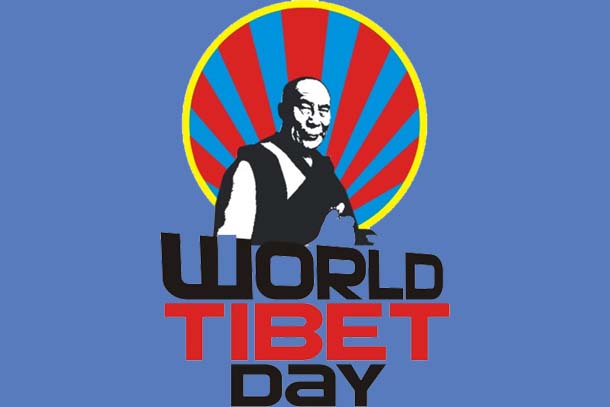 Dharamshala: On July 6, Tibetans and Tibet supporters worldwide will celebrate the second annual World Tibet Day. During World Tibet Day, held on His Holiness the Dalai Lama's 76th birthday, groups will view the documentary "The Sun Behind the Clouds: Tibet's Struggle for Freedom" and observe the anniversary of the Uyghur Uprising in East Turkestan.

World Tibet Day was founded in 1998 Richard Rosenkranz, a former US senate correspondent and Pulitzer Prize nominee, and by the Dalai Lama's younger brother Tendzin Choegyal. The event strives to increase awareness of the genocide in Tibet, support the restoration of basic freedoms in Tibet, and celebrate Tibetan culture.

In order to attract a large number of participants, the founders chose His Holiness the Dalai Lama's birthday, an already widely-celebrated day, as the date. Tibet support groups all over the world, such as Friends of Tibet, a group founded in Mumbai with many international chapters, will host World Tibet Day events.

Friends of Tibet (www.friendsoftibet.org), urges Tibet supporters to become involved with World Tibet Day. "We need to act now: Tibetan people in occupied Tibet are facing cultural genocide; it's urgent we act immediately. As one response to this, we are trying to make WTD as big as possible in size and scope--through observances by Tibetan Associations and support groups along with educational campaigns in schools and colleges around the world."

"The Sun Behind the Clouds," a film by Ritu Sarin and Tenzing Sonam, focuses on the events surrounding His Holiness and the Tibetan people during the year 2008. Such events include the 2008 protests in Tibet, the global reaction to these protests, the Beijing Olympics and the unsuccessful talks between His Holiness and the Chinese government. The film also looks at His Holiness the Dalai Lama's peaceful approach to dealing with China through dialogue differ from the more confrontational actions of younger Tibetans.

The WTD event will also honor those who died in the 5 July 2009 peaceful protest by Uyghurs against Chinese authorities in East Turkestan, a protest met violently by the authorities. The protest escalated ethnic tensions between Uyghurs and Han Chinese, and it is estimated that over 1000 died in the conflict.

According to His Holiness the Dalai Lama, "World Tibet Day has opened many hearts to fundamental rights of the Tibetan people to preserve our culture and to practice our religion freely. The event has greatly raised public awareness to the present threat to the very existence of the Tibetan people."

For more information about World Tibet Day and about hosting a WTD event, visit www.worldtibetday.org.