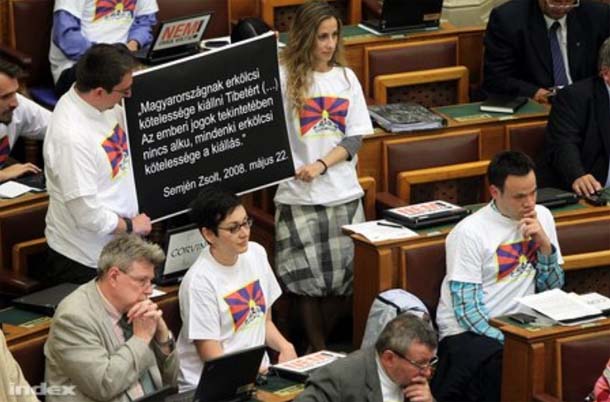 Brussels: Demonstrations against Chinese premier Wen Jiabao's visit to Hungary were banned this week, and all Tibetans living in Hungary were required to report to the Hungarian immigration office. Wen Jiabao met with Hungary's prime minister, Viktor Orban, on June 25. His visit came amidst the economic crisis facing the Eurozone and hopes that China can help Europe through investment and the buying of European debt.

Peaceful protests by Tibet supporters, the Hungarian Falun Dafa Association and human rights organizations were planned during Wen Jiabao's visit. However, a few days before the visit, Falun Dafa was told that if it did not withdraw its request to demonstrate all future requests would be denied. According to Falun Dafa's president, the ban was due to Chinese pressure.

Further, all Tibetans living in Hungary were instructed to report to the immigration office in Budapest on Saturday - a move widely seen as a strategy to keep them away from the Hungarian parliament in Budapest during Wen Jiabao's visit. The office is located far from the parliament and is usually closed on Saturdays. The official reason for the instruction was given as, "They were busy and could receive them for a control only that day."

On Friday, Namgyal, a Tibetan man, carried a Tibetan flag near the parliament, but was halted by a group of pro-Chinese activists carrying Chinese and the Hungarian flags. He was then instructed by two people in civilian dress, who declined to show any police ID when asked, to put away the flag and leave the area. A cameraman who was filming Namgyal's action was forced to turn off his equipment. The pro-Chinese activists were allowed to continue their demonstration.

The controversy over the banned protest was discussed during a session of the Hungarian Parliament, with several MPs showing their support for Tibet by wearing Tibetan flag T-shirts. Prime Minister Viktor Orban defended the ban, saying, "This is a free country - we do not wish to prevent any demonstrations against foreign visits. However, demonstrators are expected to refrain from undermining government efforts which serve the nation's interests...Freedom of expression is okay, scandals or trouble-making are not".

Ms Timea Szabo, deputy head of the parliament's human rights committee, has called for the heads of Budapest's police force to give evidence in connection with their handling of the planned protests. In a statement on Saturday, she said she would investigate personally on what basis the Immigration Authority had called the Tibetan refugees to its office, as they were living in Hungary legally and had residential and work permits.

Earlier this week, Ombudsman Mate Szabo initiated an investigation to establish whether the Hungarian authorities had violated the rights of assembly and expression, and the ban on discrimination.

Fricskó Sándorné, president of the Hungarian Falun Dafa Assocation, stated that the ban on the demonstrations was unconstitutional - that the Hungarian constitution specifies only two causes for denying a request to demonstrate - jeopardizing the operations of the government or blocking traffic - and that neither of those applied.

"The police are under pressure to abuse the law of this country," said Fricskó Sándorné. "This Hungarian case seems to be a trend in which the Chinese communist party forces other nations to break their own laws and to deny citizens the right to exercise their freedoms in their country."