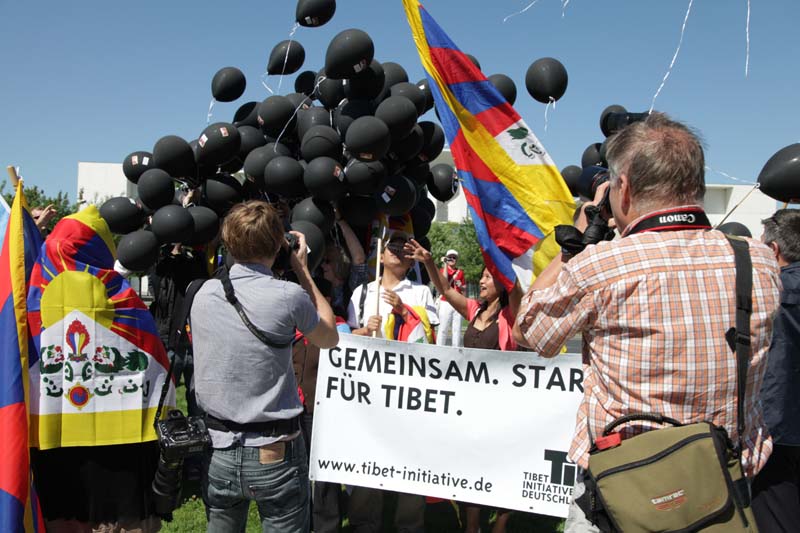 Berlin: - On June 28, 2011, the Tibet Initiative Deutschland (TID) greeted Chinese prime minister Wen Jiabao in front of the German Kanzleramt with 300 black balloons symbolizing the disappearance of 300 Kirti monks since March 2011. Ahead of inter-governmental talks, Wen Jiabao was received with the highest military honors by Germany's chancellor Angela Merkel.

"We are glad that chancellor Angela Merkel spoke out for an improvement of the human rights situation in Tibet " said TID´s chairman Wolfgang Grader. „Nevertheless, it is also important to continue raising awareness about the situation in Tibet." The event generated a lot of media interest: the television channels ZDF and Euronews broadcasted the balloon-campaign and more than 200 German newspapers reported on TID´s protest.

The violent crackdown on the protests in Kirti have lead to worldwide indignation in the past few months. „The disappearance of peacefully protesting monks clearly illustrates the helplessness of the Chinese government when faced with democratic movements. China is afraid of the Arabian virus", said Grader. This is even more so, since Sichuan is not the only region in China in which democratic protests have erupted recently.

The demonstrations in Kirti began in March after a 21-year old monk died by setting himself on fire. In light of continuing protests, the police finally stormed the Kirti monastery and deported over 300 monks to an undisclosed location. The present situation in Kirti is tense and arrests are still taking place.

The Tibet Initiative Deutschland (TID), founded in 1989, advocates for the Tibetan people's right to self-determination and the protection of human rights in occupied Tibet. With 60 regional groups and nearly 2,000 members throughout Germany, the TID is a strong voice for Tibet.