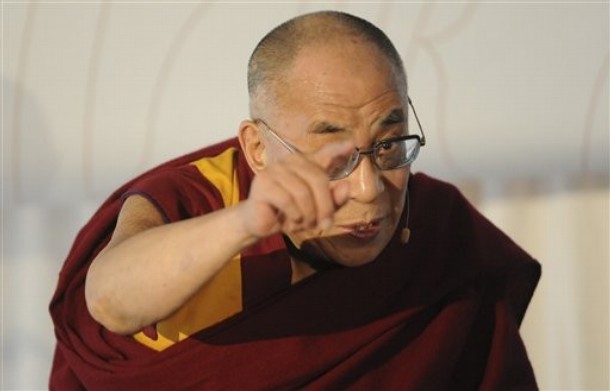 Dharamshala: The spiritual leader of Tibet, His Holiness the Dalai Lama told the Associated Press on Friday that the Chinese government has no right to choose his successor upon his death. He claims that the next Dalai Lama will be born in exile somewhere outside of Chinese-ruled Tibet, and stated on Friday that he has the last say on the subject of his rebirth.

Authorities in Beijing, however, counter by arguing that he will be born in Tibet, just as his predecessors were.

"It's a disgrace they want to control that," he told the Associated Press. "As far as my own rebirth is concerned, the final authority is myself and no one else, and obviously not China's communists."

His Holiness also made the point that since the Chinese Communist government is anti-religion, they can't possibly have a say in the very religious matter of choosing his reincarnation.

The choice of the successor of the now 76-year old His Holiness the 14th Dalai Lama will be a very significant political event in the future of Tibet. Because their loyalty to the current Dalai Lama unites Tibetans in exile all over the world, Chinese authorities hope that with his death will also come the death of the Tibetan movement.

The process of identifying successors of His Holiness the Dalai Lama has been going on for over six centuries. Traditionally, a group of Buddhist high teachers (lamas) and Tibetan government officials has taken on the responsibility of finding the Dalai Lama's reincarnation. The process usually takes a few years; for the current Dalai Lama it took four.

In accordance with Buddhist belief, visions and omens are used to point the search party in the right direction. For example, visions of three Tibetan letters, a monastery with a specific roof, and a house with turquoise roof tiles were used to direct the search party of the current Dalai Lama. When they find the boy who could possibly be the reincarnation, they put him through certain tests. He is presented with certain items, some of which belonged to the previous Dalai Lama. If he identifies which objects are "his" correctly, he is proclaimed to be the next Dalai Lama.

With the unprecedented problem of selecting a Dalai Lama under a Chinese-ruled Tibet, there is much speculation as to the future of the position of Dalai Lama. There will most likely be two Dalai Lamas: one sanctioned by the Beijing government and one chosen in exile by Tibetan Buddhist high lamas.

This problem is foreshadowed by the current situation with two Panchan Lamas, one chosen by Tibetan Buddhist teachers and subsequently kidnapped by Chinese authorities, and one selected by the Chinese government itself.

According to His Holiness the Dalai Lama himself and to Tibetan Buddhist tradition, he has control over where he will reincarnate, and has even discussed the possibility of reincarnating within his lifetime.

On the subject of returning to Tibet, His Holiness has claimed that his concerns are not for Tibet's independence from China, but for the basic rights of the Tibetan people. "As soon as China's government is showing their courage to face the reality, then I am ready to go there to help them to promote genuine reconciliation," he claimed.

Chinese authorities say he can return to Tibet with conditions: he must give up separatist activities, accept Tibet as part of China and accept Taiwan as a province of China. His Holiness does not plan to return to Tibet.