Details
Official website of His Holiness the 14th Dalai Lama 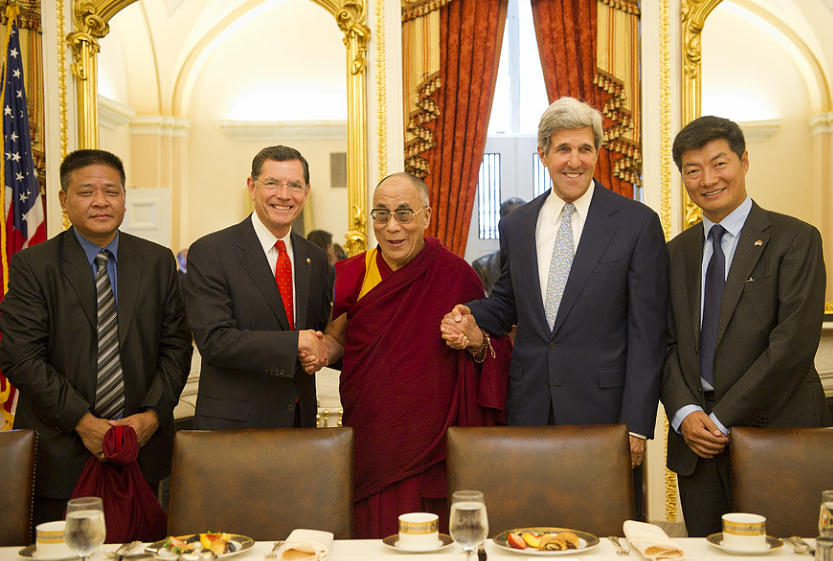 Washington DC, USA, 13 July 2011 - On July 13th the spiritual leader of Tibet, His Holiness the 14th Dalai Lama left for the teaching venue very early in the morning to undertake the  self-generation prayers, part of the Kalachakra preparatory rituals.

Senator Kerry formally welcomed His Holiness saying ‘Tashi Delek". He said he admired His Holiness' message of peace. Senator Kerry said that Congress had the greatest respect for His Holiness as indicated by the Congressional Gold Medal bestowed on him in 2007.  Senator Richard Lugar, the Ranking Member, spoke next. He, too, expressed his admiration of His Holiness and assured him that he had strong friends in the Senate.

In his remarks, His Holiness explained the devolution of his authority. He then talked about people being important saying that just as the world belonged to humanity, China belonged to the Chinese people. His Holiness also talked about his deep admiration of democratic principles and about how the Tibetan people appreciated the democratic freedom in the United States. His Holiness said he wanted to thank the United States Senate for the good support to the Tibetans. He reiterated that Tibetans were looking for a solution that did not involve separation of Tibet from China.

His Holiness also talked about the situation in Tibet where there were increasing control in the people's ability to preserve and promote their identity and culture. He said one source of encouragement was the growing interest in Tibetan Buddhism in the Chinese community.  His Holiness highlighted the right of the 1.3 billion in China to know reality as also their having the ability to judge what is right and wrong. Therefore, His Holiness said that censorship was immoral and transparency was needed in China.

Dr. Lobsang Sangay informed the Committee members of the situation in Tibet and how there was a form of undeclared martial law in Tibet. He also laid emphasis on the need to support education of the Tibetan people and to help them have economic sustenance.  The senators and the Tibetan leaders discussed what the Senate could do to help the Tibetan people.

Following this meeting, His Holiness attended a separate function within the Capitol complex, where he was presented with the Mother Teresa International Caring Award for dedicating his life to promoting the values of caring, compassion and public service by former senators Robert Dole and Tom Daschle, honorary co-chairs and Mr. Val J. Halamandaris, executive director of the Caring Institute.

"Today we were honored to recognize the peaceful work that one man has accomplished because he truly cares for the people he serves," said Senator Daschle.

"His Holiness is driven by a sincere compassion for people," said Senator Dole. "The Caring Institute was founded upon this same concept. Its mission is rooted in Mother Teresa's directive that we must reverse the poverty of spirit that exists in our world today."

"In Tibetan Buddhism, a Bodhisattva is anyone who is motivated by compassion and seeks enlightenment. The Tibetan name Dalai Lama means Ocean of Wisdom. His Holiness is the personification of caring, compassion and kindness," said Mr. Halamandaris. "Our goal is to highlight incredible people who give back to society in outstanding ways and who are truly making a difference in our world."

In his communication informing His Holiness of the award, Senator Dole had said, "No one better personifies the value of caring than you. Caring is, after all, a synonym for compassion - a value which is central to your religion.  You have devoted your life to promoting this value worldwide."

Mother Teresa was among those who had been honored with this award by the Caring Institute, which was "founded in 1985 to honor and promote the values of caring, integrity, and public service." The Institute draws its inspiration from Mother Teresa, about whom a documentary was shown at the beginning of the award ceremony.

His Holiness expressed his appreciation of the work of the late Mother Teresa and said he was honored to be receiving this award.

His Holiness then returned to the Verizon Center, the venue of the teachings.

Thereafter, His Holiness completed the preliminary initiation for students, which included generation of Bodhicitta and the distribution of the protective string and the Kusha grass to study the dreams.