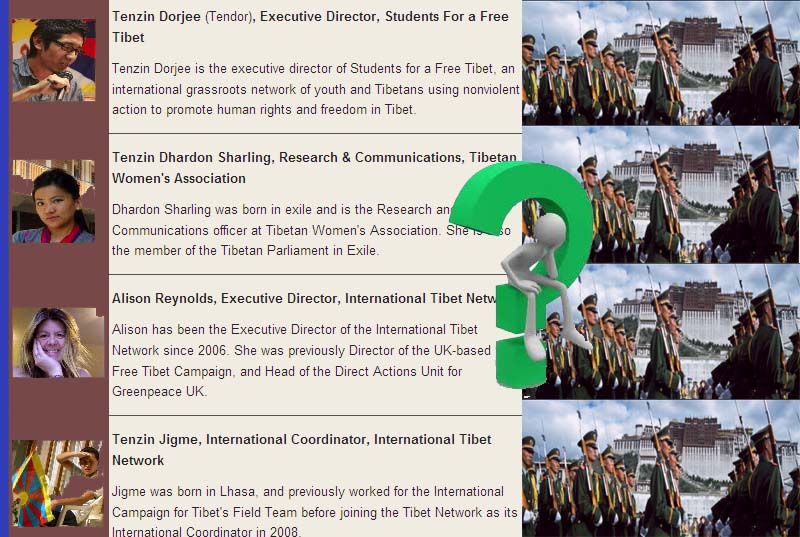 Dharmashala: - In what is believed to be the first press conference using the video-chat program Google +, Tibet supporters from the International Tibet Network, Tibetan Women's Association, and Students for a Free Tibet came together on July 15 to discuss the current situation in Tibet.

The press conference addressed the closing of central Tibet (Ch: Tibet Autonomous Region) to foreign tourists to mark the 60th Anniversary of the 17 Point Agreement as well as recent crackdowns on Tibetan protesters.

Panelists included Tenzin Dorjee of Students for a Free Tibet, Dhardon Sharling of the Tibetan Women's Association, and Tenzin Jigme and Allison Reynolds of the International Tibet Network.

Speaking of the celebrations commemorating the 60th Anniversary, Jigme said, "While Galas, exhibitions and book launches are being held in Lhasa, Tibetans from Kham and Amdo are being brutally repressed - a part of life in occupied Tibet that China is not showcasing in its propaganda events."

To get an idea of what is really happening in Tibet, he said, one must look in Tibetan homes and Tibetan monasteries.

Reynolds spoke about how China's "extreme mechanisms of control," including deaths in monasteries such as Karze, long prison sentences for demonstrators, and the current security situation in Lhasa have only fueled more protests.

One main topic during the press conference was the non-violent forms of resistance that are currently taking place among Tibetans.

One of these acts of resistance involves the boycott of Chinese vegetable shops in certain areas of Tibet. The boycott started when a small group of Tibetans in a specific area decided to stop buying from Chinese vegetable shops. The movement grew so large that some Chinese shops were forced to close down, enabling Tibetan vegetable sellers to open new shops. The movement was so successful that it has spread to neighboring areas.

Dorjee described such tactics as using "personal and social space to make change on the ground, at the grassroots level." He termed these types of resistance "strategic nonviolence," saying that the boycott of the vegetable shops represents a "fundamental shift" in the Tibetan struggle.

Again using a peaceful strategy to keep their culture alive, some Tibetans have started making a conscious effort to read and speak only in Tibetan when they are among family and friends. Some groups of Tibetans have agreed among themselves to start paying a voluntary fine every time they speak a Chinese word, despite the fact that this tactic caused trouble for some monks.

Many Tibetans are starting to educate themselves about non-violent strategies and how they have worked for leaders in the past such as Gandhi, according to Dorjee. Tibetans' interest in these types of movements is no doubt fueled by their devotion to His Holiness the Dalai Lama and his firm commitment to peace and nonviolence.

"It is time for the world to put their weight behind the Tibetan peoples' nonviolent struggle for freedom," Dorjee said.

Hope for the future

Dorjee said that things may change economically for China, calling the recent economic growth in China a "miracle."

He also claimed that human rights and economic interest are not exclusive; just because a country opposes rights abuses does not mean its economy goes down.

Dorjee called on China and the international community to act. He urged China to withdraw forces from Tibet and release detainees, for governments internationally to issue statements of concern about the situation in Tibet, for the media to press for access in Tibet, and for the next generation of Chinese leadership to radically change Tibet policy.

"We are not understanding human rights and equality as much as we should be," she said, speaking of the importance of "continued action and consistent action."