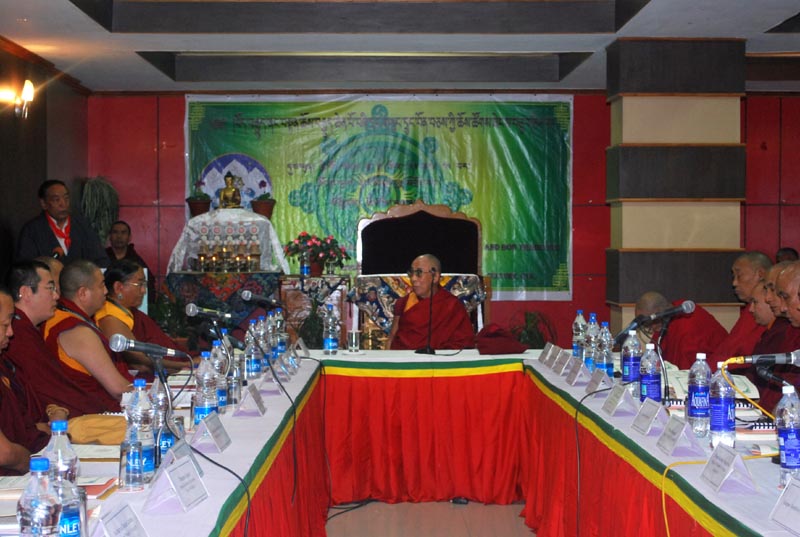 Dharamshala: Today, 23rd September saw the second day of the eleventh conference of the heads and representatives of the four major traditions and sub-traditions of Tibetan Buddhism and the ancient Bon religion of Tibet, in Dharamshala, India.

This morning, delegates gathered for a one-hour prayer session at the main Tibetan temple, and later adjourned to the Surya hotel for their meeting, which was attended by His Holiness the Dalai Lama.

His Holiness spoke on several topics, including the importance of religious harmony, the transfer of political authority to elected leaders, and the issue of his own reincarnation.

"Recently," he joked, "I met a foreign journalist and he asked me about my reincarnation. I took off my glasses, told him to look at my face and said, ‘Tell me, will I be hurried in my next incarnation?' The journalist said, ‘No! No! No!'"

His Holiness continued in a more serious vein, "I used to talk a lot about my reincarnation, and it would be good if there were official religious guidelines on the matter, not only for me but for all sects of Buddhism.

"Leaders of all the sects gathered here today should discuss this issue and reach their decision.

"I recently distributed a memorandum to you all concerning my reincarnation. After this meeting, some of us will gather to discuss how it could be amended. We need to reach a decision during this conference. Tomorrow is the last day and, after that, we need to make a declaration to our elected political leaders and the public."

His Holiness went on to discuss China's attitudes towards religion and reincarnation.

"In ancient times, Chinese dynasties interfered with the reincarnation of Tibetan spiritual leaders. But the monarchs themselves were religious and some of them became students of and built relationships with Tibetan lamas.

"But the Chinese communist party does not believe in religion, and views it as false. It regards Tibetan Buddhism as very backward. Sometimes they denounce me as a demon. If they are saying demons cannot be reincarnated, that makes sense.

His Holiness added, somewhat sardonically, "Also, they must first find the reincarnations of Mao Tse-tung and Deng Xiaoping. After that, they can find my reincarnation. That would be reasonable.

"In my memorandum, there are two points to consider. In 1969, I said that whether the institution of the Dalai Lama should continue or not should depend on the decision of the Tibetan people at any given time.

"But, on the other hand, maybe we should now specify a time for discussion, maybe when I am in my 90s - the same age as the first Dalai Lama, Gedhun Drubpa, when he died. From that discussion, we could reach a final decision on how to recognise the reincarnation process."

The minister of religion and culture, Pema Chhinjor, will announce the meeeting's conclusions at a press conference tomorrow at 3pm.