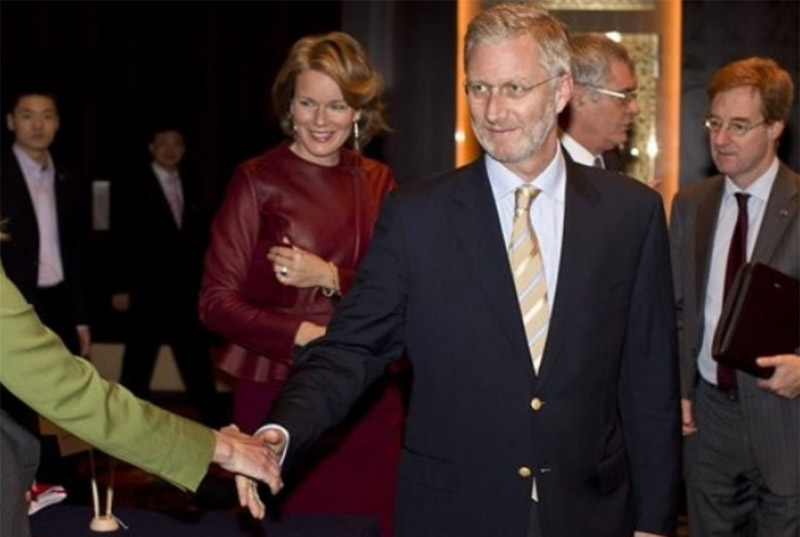 Brussels, Belgium: - As the Belgian Prince Philippe is now on a trade mission to China, one of the biggest trade missions he has ever done, on 26th October, two Belgian Tibet supporters, Dennis Barbion and Ilse Keysabyl, have written a letter to the Prince of Belgium to express their concern about the Tibetan issue and the human rights violations in China and Tibet. A copy of the letter is also sent to the Belgian Minister Steven Vanackere of Foreign Affairs and Trade.

Prince Philippe is the oldest son of the Belgian King Albert II and he will be the next King of Belgium. More than 400 business people from 200 different companies are joining the Prince on the business trip to China.

In the letter is stated that good contacts and a good relationship among countries are indeed very important. The fact that the Belgian Prince is concerned about the economics, especially now with the economic crisis, is also a good thing. Nevertheless, given the enormity of the trade mission to China and it's economic interests, the two Tibet supporters wanted to express their deep concern about human rights and the lack of freedom in China and Tibet.

The letter refers to the violent invasion of Tibet by the Chinese army in 1950, the oppression of the minorities in China, and the unfreedom and lack of respect of human rights in whole China and Tibet. Also mentioned in the letter to the Prince are the facts that the Tibetan language is banned in Tibet by the Chinese authorities, for example in the education, the school books etc., and that already ten young Tibetans in Tibet have set themself on fire this year, of which eight since September 26, as a desperate cry about the inhuman living conditions of Tibetans under the Chinese dictatorial regime, and to ask for more attention, help and support.

"The lack of freedom for ordinary citizens throughout China is a fact. Human rights are violated widely. Anyone who does not agree with the official position of the government, gets arrested. There is no freedom of speech and all the information is censored. The people who struggle peacefully for more freedom end up in prison where they also are beaten and even tortured. Every call for more freedom, openness and democracy is suppressed."

"Today we see that economics, business and money are often a priority, at the expense of humanity and human values. Respect, not only for the individual, the citizen, but for a whole population including all minorities in China and for their own specific culture, is hard to find. A peaceful society and tolerance are so important. For decades and decades already, a vast population in China is living under the dictatorship of the Chinese government. How must that be, to live without freedom, without democracy, with no openness and transparency?"

In the letter, Dennis and Ilse also refer to the documentary "China's lost sons" that was broadcast last week on the Belgian television. The documentary by Channel 4 shows that at least 10,000 mentally ill men in China are lured and kidnapped, and forced to work as slaves in a brickyard where they also are mistreated. More than half million mentally ill people in China are at high risk of being kidnapped. Thousands of families are trying to find their lost son themselves, as the police and the official authorities do nothing.

"It really is terrible and shocking that the economy in China is growing so rapidly, but also through slavery, by kidnapped mentally disabled people who are forced to work in a brickyard without a salary, child labor and exploitation of workers".

Finally, the letter asks the Belgian Prince whether he is aware of the unfreedom and lack of respect of human rights in China and Tibet, and how he feels about that.

The letter is sent on 26th October 2011 and will definitely be delivered with the Prince personally.