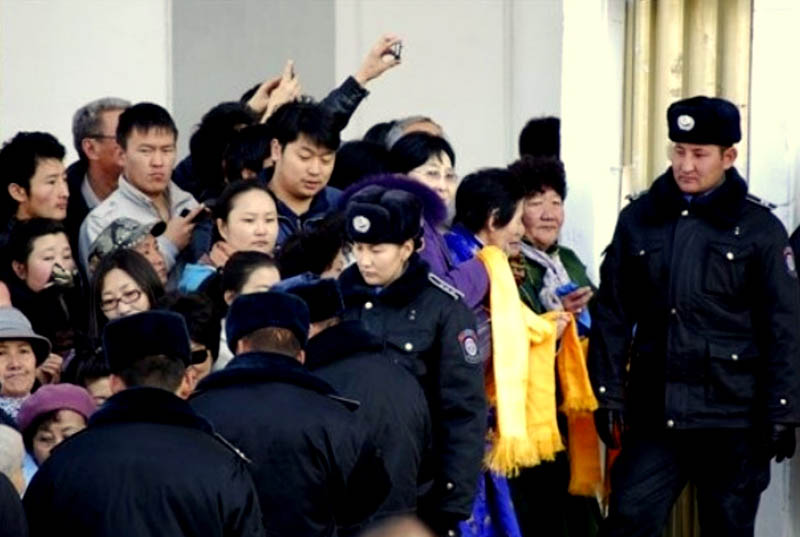 Ulaanbaatar, Mongolia: The spiritual leader of Tibet, His Holiness the 14th Dalai Lama's three-day visit to Mongolia which ended on Friday, November 11th, was amazingly successful as thousands of Buddhist devotees had the opportunity to listen his Buddhist teachings and public talks.

His Holiness the Dalai Lama's first visit dates back to 1979. This was his 8th time in Mongolia, from 7-11 November, at the invitation of the Center of Mongolian Buddhism, the Gaden Theckchen Choeling monastery. Before leaving Mongolia, His Holiness met the press and answered a few questions. In his speech, he noted that he was very happy to be in Mongolia again and even though it was a short visit, it was meaningful.

During his three-day visit to the country, His Holiness the Dalai lama gave a public lecture titled "Ethics for the New Millennium" to university students and Mongolian youth and preached teachings "Praise to Dependent Origination" and "Three Principle Paths" as well as Avalokiteshvara (Tib: Chenrezig) Empowerment to monks, nuns and a thousand other Buddhist followers. His Holiness underlined the need to study Buddhist teachings in his lecture "Even the great scientists and scholars considered Buddhist religious philosophy as psychological science".

"Outstanding scientists are eager to study Buddhist science, not religion. This is why the youth is recommended to carefully study Buddhist science aside of contemporary science in order to develop their intellectual ability and knowledge. Religionists of the 21st Century aside of performing religious rituals, following religious teaching, rules and prayers, must be people well-versed in religious science," His Holiness said.

At a press conference conducted by Gaden Theckchen Choeling monastery on the occasion of His Holiness the Dalai Lama's visit, it was stressed that his visit was purely religious, without any political agenda. The head of the Monastery D.Choijamtsa said,"Mongols revered and worshiped His Holiness for a long time. Buddhist believers and monks and nuns were waiting for his arrival."

"The present visit was arranged at the wish of thousands of Mongolian Buddhist followers including monks and nuns. Faith and religion in democratic society is free, this is why His Holiness, the 14th Dalai Lama has been invited to visit our country two-three months earlier", he further added.

Communist rule ended in 1990 in Mongolia, and some 90 percent of its 2.7 million people consider themselves Buddhists. The Communist Chinese Regime has ruled Tibet in an often brutal fashion since 1951.