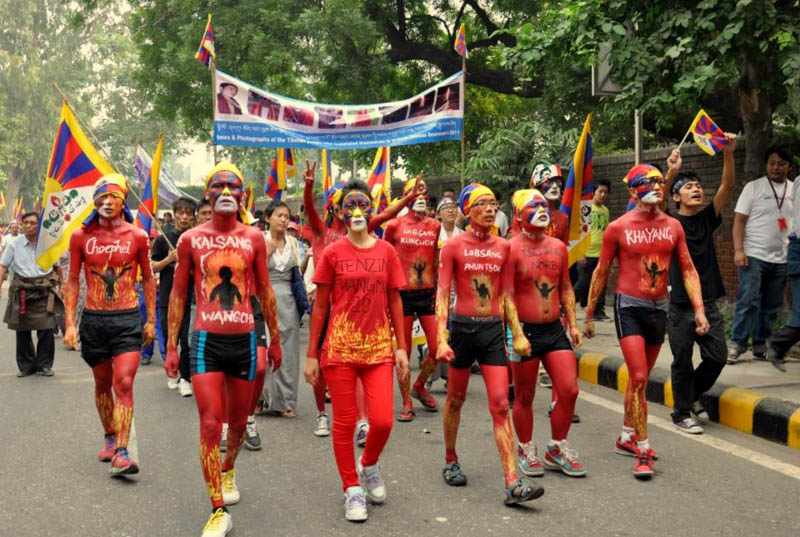 Dharamshala, India: - The current situation still remains tense in eastern Tibet as some reports tell of pamphlets distributed and posted around the Kirti Monastery and the market place in Ngaba town of eastern Tibet, which state that if Chinese policies at the monastery and in the town continue, "many more people will be prepared to give up their lives in protest." Exiled Tibetans in India strongly urged the Chinese government to end its repressive policies that restrict the basic freedom of Tibetans to practice their religion.

The current situation in Ngaba has been extremely tense since the first self-immolation in March this year: local sources report that there are still high numbers of armed security personnel in the town and increased numbers of soldiers deployed outside the town. Locals describe the town as being "completely under military control".

"We represent the free voice of the desperate yet bold non-violent calls by young Tibetans inside Tibet to alert the world to the ongoing atrocities being committed by the People's Republic of China. We are gravely concerned about the deteriorating situation inside Tibet, which is leading Tibetans to feel so desperate and frustrated that they are taking to such extreme acts. Posters appearing around Kirti Monastery and Ngaba County have warned that if the present situation continued, many more people are prepared to give their lives in protest," they said, in a statement issued Monday.

The People's Solidarity Movement will hold demonstrations every Wednesday starting from 16th November 2011 in solidarity with the plight of the Tibetan people inside Tibet and "particularly those who have sacrificed their lives as an act of protest against the oppressive Chinese regime."

"In the aftermath of the Tibetan people's mass uprising in 2008, Chinese government has increased its military presence and reintroduced its patriotic re-education campaign particularly in the monasteries in Tibet,' it said. The Solidarity Movement Tibetans are being forced to denounce their most revered leader His Holiness the Dalai Lama and are being denied their basic right to freedom of religion, assembly and expression.

The statement said "More than 500 Tibetans and supporters from all over Delhi will assemble at the Teen Murti Circle in Chanakyapuri on November 16, 2011 to appeal to the Chinese leadership and take out a protest march close to the Chinese Embassy. The venue and the time of the protest will remain the same every Wednesday."