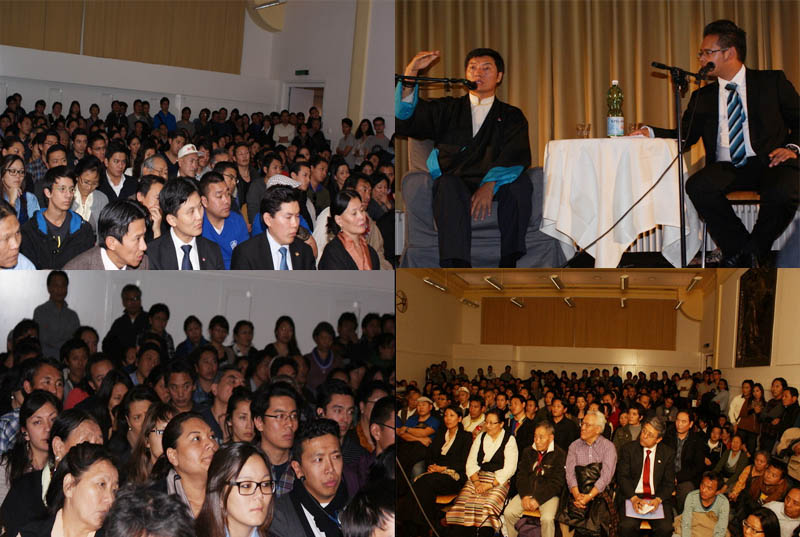 Zurich: We must keep in mind the interest of fellow Tibetans in Tibet, said the political leader (Kalon Tripa) of the Tibetan government in exile, Dr Lobsang Sangay, during his address to the Tibetan community in Switzerland and Liechtenstein. He also said that Tibetan people must fulfil His Holiness the Dalai Lama's wishes.

Over 600 Tibetans attended the address by their new political leader yesterday morning (Sunday) in Zurich.

He spoke at length with sadness of the self-immolation by 11 Tibetans in Tibet - their individual sacrifice to highlight the struggle for the survival of Tibetan culture and identity under China's brutal rule.

The unanimous support by the Tibetan Parliament members in approving the nomination of the six Kalons sent a good message to the Tibetan people in Tibet that both the Kashag and Parliament can work together for the common interest of Tibet, he said.

Before the start of Kalon Tripa's address, the Tibetan community's cultural group sung the Tibetan national anthem. This was immediately followed by one minute silence in memory of the Tibetans who self-immolated in Tibet to highlight the present desperate situation in Tibet.

During the two and half hour address followed by questions and answers, Kalon Tripa said, "We are most grateful to India. We must never forget India's kindness."

The Swiss Tibetan Friendship Association hosted a lunch in honour of Kalon Tripa. In his brief address to the group's board members and section leaders he extended Kashag's "heart felt gratitude and appreciation for their support."

In the afternoon, the Tibetan Youth Association of Switzerland organised a town-house-style-meeting. The meeting hall was completely packed with many Tibetans waiting outside the hall.

The recent change in the Tibetan community witnessed the hand-over of responsibility by the older Tibetan generation to the younger generation. "We must fulfill His Holiness the Dalai Lama's wishes and ensure that the hard work done by the older generation is accomplished," he said.

Kalon Tripa said all young Tibetans should feel proud to be a Tibetan and must endeavor to serve the Tibetan community.

He once again emphasized his key message of better education for the younger generation.

"We need to improve the foundation and environment in our schools," he said.

His education policy and the recent meetings with Tibetan school principles and administrators have started a debate on this important issue.

He told the Tibetan youth in Switzerland that they must endeavor to become more professional in their educational studies. While elaborating his Tibet Core program, he encouraged the youth to volunteer their service to the Central Tibetan Administration as well as join the Swiss government services.