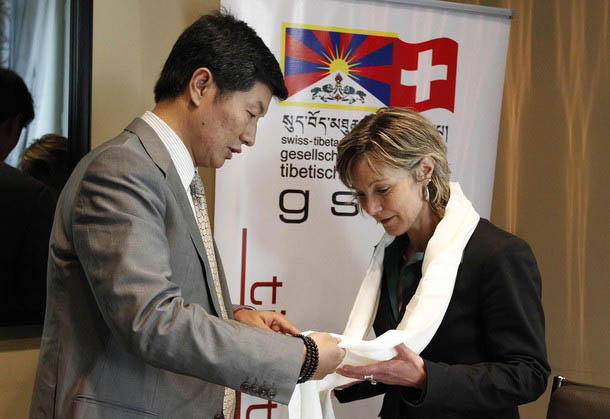 Zurich: The Swiss foreign ministry has said that the spate of self-immolations in Tibet this year and the desperation they express are “very worrying”.

The statement, which was issued on Monday during a visit by Dr Lobsang Sangay - Kalon Tripa (political leader) of the Central Tibetan Administration - stressed that the human rights situation in China, and especially in Tibet, is a regular subject of discussion between Switzerland and the Chinese authorities.

Dr Sangay briefed foreign ministry officials in Bern on the 12 self-immolations in Tibet since 16 March, saying, “Human beings, if given a choice, would choose to live, but the very desperate situation in Tibet under the Chinese rule has led to the tragic situation in Tibet today.”

He expressed his appreciation and gratitude to the government and people of Switzerland, and to the Red Cross, for their support of the Tibetan people since the 1960s.

Switzerland was the first country outside Asia to officially accept Tibetan refugees. Today it has the largest Tibetan community in Europe.

Dr Sangay commented that the Tibetan people have once again endorsed the ‘middle way’ approach by electing him.

He said that, during his 16 years at Harvard University in the USA, he had organized five conferences with scholars from China, two of which were attended by  His Holiness the Dalai Lama.

He added that such dialogue “requires endurance, patience and compassion,” but that, “Over time people change - we need to create an environment for this change.”

Addressing the media, Mrs Graf said that any free trade agreement between Switzerland and China must include the issues of human rights and the environment.

Dr Sangay added that those countries which trade with China have seen few benefits and that, rather, they now face trade deficits. He called on those countries to speak up on human rights more forcefully.

He  did, however, emphasize that the Tibetan people have nothing against the Chinese people or China as a nation.

“We are against the hard-line repressive policies by the Chinese government,” he said. Tibetan people deserve freedom – religious, human rights and expression.”

Tomorrow, Dr Sangay will leave for the German capital, Berlin, where he has a series of appointments with the members of the German parliament. He will also address the Tibetan community there.