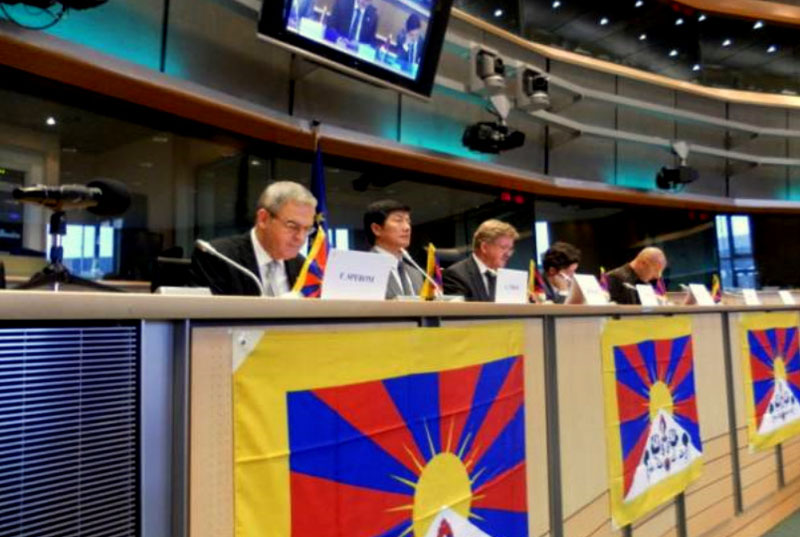 Brussels, Belgium: - The poliitical leader (Kalon Tripa) of the Central Tibetan Administration, Dr Lobsang Sangay was invited to address the Foreign Affairs Committee of the European Parliament at its extraordinary meeting immediately after the Minister for Foreign Affairs of the Republic of Macedonia on 29 November.

Dr Sangay expressed his gratitude to the European Parliament for it's consistent support to the non-violent freedom struggle of the Tibetan people and reiterated his commitment to the Middle Way Policy of His Holiness the Dalai Lama for resolving the issue of Tibet.

He also spoke of the recent wave of self-immolations in the Tibetan community and the democratic transition of the Central Tibetan Administration.

Kalon Tripa emphasised the importance for international bodies such as the European Parliament to support those following non-violence and democracy and thus sending the right message to the authoritarian regimes.

Kalon Tripa also met with the Chair of the Greens, MEP Daniel Cohn-Bendit and the head of cabinet of the President of the European Parliament.

Earlier in the morning, Dr Sangay attended the Tibet Intergroup Conference on Genuine Autonomy in the European Parliament where he was the key note speaker. The conference was organised by the President of the All-Party Tibet Intergroup of the European Parliament, MEP Thomas Mann. The panelists consisted of MEPs, sinologists and experts on autonomy. Over 300 participants from EU institutions, national Parliaments, embassies, NGOs, journalists and individuals attended the conference yesterday.

The President of the Tibet Intergroup, MEP Thomas Mann in his opening speech said, "We have to realise that the situation in Tibet is getting worse. In April 2011, Chinese armed forces surrounded Kirti Monastery. As a consequence, a large number of monks committed self-immolation. This drastic form of protest shows their hopelessness and desperation.

"The Tibet Intergroup of the European Parliament urged the European Commission to intervene. The answer from High Commissioner Lady Ashton was that the European Union is alarmed about the reports of detention, beatings and the deaths of monks," Mr Mann added.

MEP László T?kés, Vice-President of the European Parliament and Member of the Committee on Human Rights, emphasised in his speech: "The ongoing human rights dialogues between the European Union and China need urgent reassessment as they have failed to deliver the desired results. The human rights situation in China is worsening, with tighter control on society, as reflected by the recent tragic cases of self-immolation of Tibetan nuns and monks. Europe needs to respond appropriately and effectively and hold the government accountable to live up to its international obligations, as well as to urge China to ratify the International Covenant on Civil and Political Rights."

Kalon Tripa, after concluding his three-day visit to Brussels, left for London by Eurostar on Wednesday, 30 November.