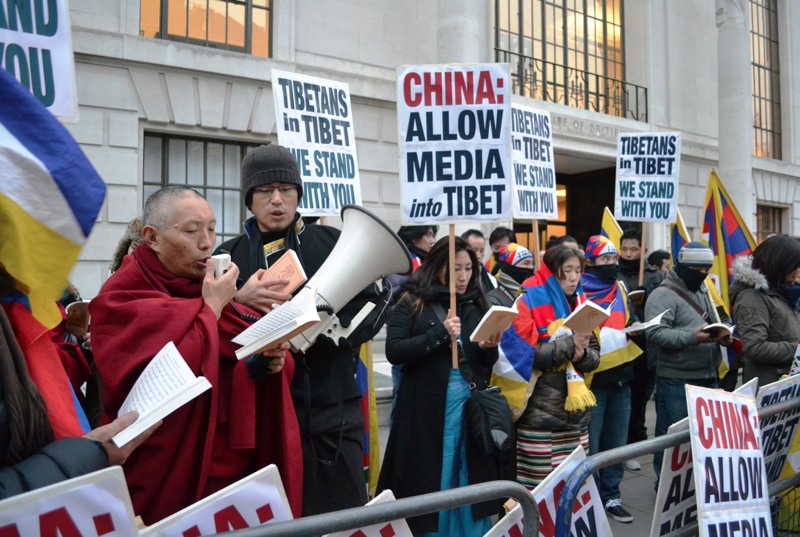 London: Standing in solidarity with those in their homeland, Tibetans and supporters gathered outside the Chinese embassy in London on Wednesday February 8th, calling upon China to stop the killing of innocent Tibetans. As the day unfolded, reports emerged of the latest and the 21st Tibetan to self-immolate, highlighting the urgency of the global need to address the deteriorating human rights situation in Tibet.

At least 150 demonstrators braved the chilly streets of London to mark their support, and a smaller demonstration was witnessed in Edinburgh. Black ribbons were worn over the mouths of many participants to highlight how Tibetans are being forcibly silenced in Tibet, a moving sight for passing Londoners during the cold February evening.

Tibetan monks led a series of prayers, highlighting the sense of mourning and loss among the community globally for those who had lost their lives, and the chorus of chanting brought home the issue and loss to all those who could hear them.

Thubten Samdup, Representative of the Dalai Lama in the UK and Northern Europe gave a heartfelt speech during the four hour vigil.

In an exclusive interview for the Tibet Post International, Thubten Samdup highlighted:

"It is very moving to see that so many people have come here to show solidarity. It is so sad to see so many lives have been lost and that the international community are looking the other way"
He added:

"I think the time has come, for the international community to recognise that the Tibetan struggle has been a non-violent one, that requires recognition, and also it deserves rewarding. We have gathered here today to send a message to the Chinese, but more importantly, we are here to send a message to Tibetans in Tibet that they are not alone".

Last week the Tibetan Prime Minister in exile, Lobsang Sangay, called for the world-wide vigils on February 8 to express solidarity with Tibetans in Tibet and to, "send a loud and clear message to the Chinese government that violence and killing of innocent Tibetans is unacceptable."

Dr Sangay said: "Stability cannot be restored in Tibet through violence and killings of Tibetans. The only way to resolve the issue and bring about lasting peace is by respecting the rights of the Tibetan people and through dialogue." He called on the international community to, "show solidarity and to raise your voices in support of the fundamental rights of the Tibetan people at this critical time. I request that the international community and the United Nations send a fact-finding delegation to Tibet and that the world media be given access to the region."