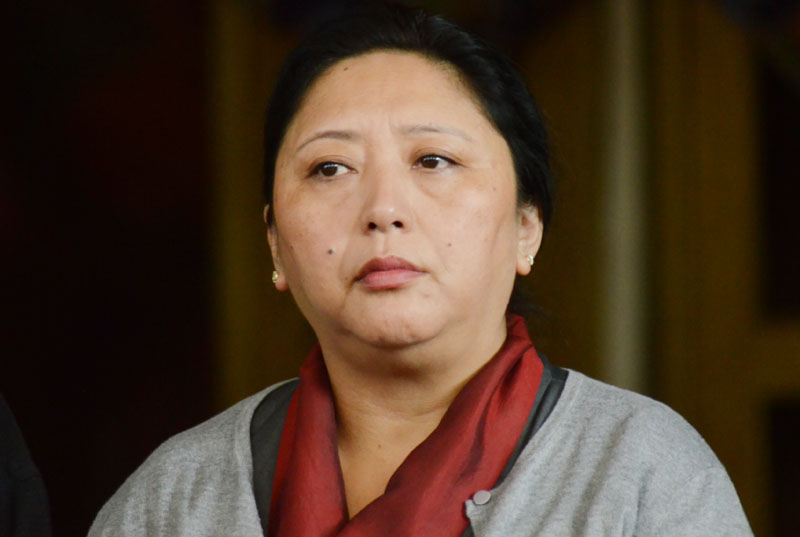 Guwahati, 26 March: - Addressing a conference today in Guwahati, Ms Gyari Dolma, the home minister of the Tibetan government-in-exile, argued that Tibet is closer to India than China. She urged people of India's North-east region, which is adjacent to Tibet, to support a free Tibet.

"When the Chinese regime in Beijing speaks about Tibet, it definitely means Arunachal Pradesh, too," Ms Dolma said. "So it is in the interest of every Indian to support genuine autonomy in Tibet, and I believe that the people of north-east India can play a pivotal role in raising their voices for us."

Organised by the Core Group For the Tibetan Cause, New Delhi, at the Vivekananda Cultural Centre in Guwahati, the conference ~ titled "Tibet and Himalayan Environment and Ecology" ~ was attended by hundreds of people, including exiled Tibetans, residents of Guwahati, and media representatives.

Ms Dolma, who is based in Dharamsala, in northern India, also pointed out that the President of the People's Republic of China, Mr Hu Jintao, is a hydrology expert and is the man behind the Chinese plan to construct a number of dams on the Brahmaputra River in Tibet.

"Not only dams, but the Chinese government is planning to divert water from the mighty river to the northern part of Tibet to support its agricultural needs," she said. "If completed, the project will have a severe negative impacts on the environment and ecology of India and also Bangladesh."

Wrapping up her speech, she referred to leader termed Mr Hu's upcoming visit to New Delhi, saying "a monster is coming to India". The Chinese president is scheduled to attend the next BRICS summit in New Delhi on 28-29 March, along with leaders from Brasil, Russia, India, and South Africa. He is also slated to meet with Prime Minister Manmohan Singh.

Mr K C Agnihotri, in his speech at the conference, criticised the Union government of India for its "weak response" to China's unnecessary intervention on Arunachal issues, including the McMahon Line, the line of control marking the boundary between India and Tibet.

"The McMahon Line was recognised in the Simla Convention and was signed by the British (India) and Tibet in 1914," Mr Agnihotri said. "We, the people of India and Tibetans in exile, still consider the McMahon Line an official international border, but the Union government in New Delhi occasionally terms it as disputed, which is actually the language of Beijing."

D N Chakrabarty, a senior journalist in Assam, argued that Tibet should get its independence from China as soon as possible. He also appealed to the United Nations to recognise Tibet as a sovereign nation, and urged New Delhi to extend formal recognition to the government-in-exile as an independent country.

"Let's boycott Chinese goods in India as a protest against Beijing's continued occupation of Tibet. We should understand that it is the duty of every citizen living in the North-east to support the cause of Tibet," Chakrabarty said.

Mr R K Khrimey, north-east convener of the Core Group For the Tibetan Cause, recalled China's 1962 invasion and march into Tezpur, Assam, after capturing Arunachal Pradesh.

"The Communist forces, however, fled as Beijing received warnings from America and France following pleas for help from Indian Prime Minister Jawaharlal Nehru," said Mr Khrimey. "After the 1820 (till 1826) Burmese attack, no forces except China have attacked the region."