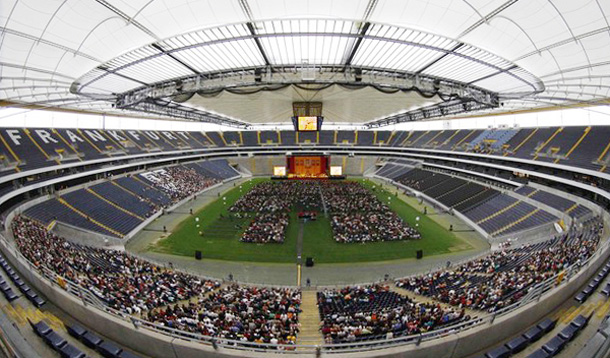 Frankfurt: His Holiness the Dalai Lama has started his Buddhism teachings in Frankfurt on 30 July. He has been invited by Buddhist Organizations based in Germany. The exiled Tibetan spiritual leader gave a lecture on Tibetan Buddhism at a crowd of nearly 40,000 people in Frankfurt stadium. He will also participate in seminars on topics "One World, One Mind One Heart" such as peace, the environment, and the economy.

According to German media; Deustche Welle, Frankfurt's mayor, Petra Roth, welcomed His Holiness the Dalai Lama, describing him as a man who had tirelessly fought for a resolution to the conflict over Tibet in China. He "symbolizes the fight for peace," she said.

"I have nothing to say except showing my face to your camera...." In a cheerful mood, the Dalai Lama greeted the media in Frankfurt late Wednesday. He said he was happy to be in Germany again. At the press conference, the exiled leader did not speak about politics, but about politicians and about rules of a happy life.

"I believe every human being, including politicians, have a potential to develop inner peace," he said. "My commitment is to make this clear that everyone has that potential to have a happy life."

During the press conference, the exiled leader gave a lot of attention to a child reporter, who asked him one question after another. The Dalai Lama answered all the questions with patience. For instance, that he never liked to study as a child or that he meditates in his spare time. The journalist also asked if he ever missed his home in Tibet. The Dalai Lama responded thoughtfully:

"If I were in Tibet, in Potala, today I don't think I could have seen so many opportunities. Because we became refugees and came to India and we found new opportunities. Of course inside Tibet things are very, very sad. But Lhasa's climate is pleasant and I am missing that."

Support for the plight of Tibetans

On Wednesday, he also met his longtime friend Roland Koch, the Premier of the state of Hesse. Koch told the Tibetan leader that Germany was concerned about human rights violations in Tibet and western China's Xinjiang region. He also said that the nation supports His Holiness the Dalai Lama's peaceful efforts to seek cultural autonomy and religious freedom.

In 2007, relations between Germany and China soured over German Chancellor Angela Markel's meeting with the Tibetan spiritual leader in Berlin.