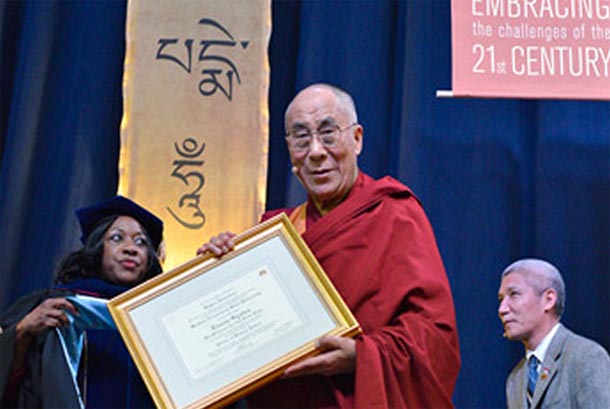 Dharamshala: On October 19, His Holiness the Dalai Lama received two honorary degrees from Amercian colleges. In the morning, he was awarded an honorary doctorate of humane letters by James Schmotter, president of Western Connecticut State University, in recognition of his humanitarian work and to celebrate his dedication to promoting world peace. Three students, one Tibetan, one Chinese, and one Indian, participated in the presentation.

The Hollywod actor Richard Gere introduced His Holiness to an audience of 3,500, speaking of the fragility of our lives, the softness of our hearts and the good fortune of His Holiness' presence.

His Holiness briefly outlined his life commitments: the promotion of human values to solve human problems and the fostering of inter-religious harmony. He said all religions convey the same message of love and compassion and that it is possible for religious practitioners to live together peaceably, as is demonstrated in India.

"I appreciate this honorary degree," he said, "especially as I haven't studied to earn it. The first time I received such a degree was in 1956 from the Sanskrit University in Varanasi, India."

Beginning his talk on Advice for Daily Life, His Holiness said, "I usually share with my friends the suggestion that we should not place all our hopes for a happy life on money, material development and its values.

"I know some very well-off, well-educated people who have all they need, yet remain unhappy. I believe that to ensure that individuals, families and society are happy, we need to encourage a full education system that includes instruction about inner values."

His Holiness explained that inner peace entails remaining calm whatever is going on around you, that it is linked to self-confidence and a calm mind and that without it we easily develop a sense of insecurity, fear and mistrust, to counter which we need a sense of concern for others.

"We need to think along these lines in our daily lives," he said. "Inner peace depends on warm-heartedness and concern for others' well being. This is in our own interest. When you get up in the morning, promise yourself to follow this aim.

"At the end of the day, review how you did. If you did well, rejoice, if you made a mistake, criticise yourself and resolve not to repeat it. Over days, weeks and months these moral principles will become part of your life."

The Nobel Peace Prize winner reiterated that love and compassion, tolerance and forgiveness are all based on having a sense of loving kindness - that if we feel an urge to do harm, we must restrain ourselves and practise self-discipline and thus protect ourselves in our own interests.

In the afternoon, around 600 Chinese students, artists, academics and other professionals gathered at Hunter College, New York City, to listen to His Holiness. College president Jennifer Raab awarded him a second honorary doctorate in liberal humanities in recognition of his work in spreading peace and compassion in the world.

"I appreciate receiving this degree," said His Holiness, "not because I attach any importance to myself, but because it is a recognition of my small contribution to humanity, which gives me encouragement.

"Thank you. I assure you that for the next 20 or 30 years my body, speech and mind will continue to be dedicated to the well-being of others. I will continue to try to spread awareness that warm-heartedness is important for peace - a secular approach based on common sense and scientific findings."

The spiritual then joined a panel consisting of Ming Xia, Professor of Political Science, and Ho-Fung Hung, Associate Professor of Sociology, and moderated by Professor Peter Kwong.

"Brothers and sisters in general and Chinese brothers and sisters in particular," said His Holiness, "I'm very happy to meet such a large number of you once again. When I came before I still bore political responsibility for Tibet, but now I have completely retired - although it's not possible for me to retire from being Dalai Lama."

"I want a happy life and you want a happy life. The more you become concerned about others, the greater your inner strength. Too often we are beset by suspicion, mistrust, jealousy, fear and anger. But once you begin to regard others as your brothers and sisters, you develop a sense of self-confidence. You can be more transparent, which brings trust, friendship and a more harmonious society. " 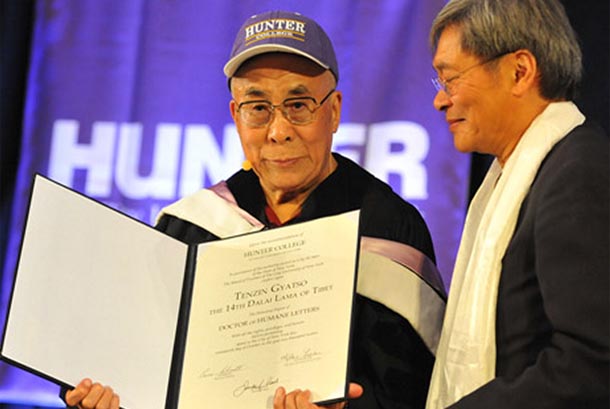 His Holiness remarked that China and Tibet have long and close links and that both have to live side by side. He said that Tibetans need Chinese help to develop, but Chinese too need help. He continued that Tibetans have a rich tradition of Buddhism and the person who played the principal role in introducing Buddhism to Tibet, Shantarakshita, was a leading philosopher and logician.

As a result, His Holiness said, Tibetan Buddhism consists of a very thorough understanding of Buddhist philosophy, logic, epistemology and the workings of the mind, and it is on the basis of this knowledge that he considers Tibetans may be able to help Chinese.

However, he said, while Buddhism may make a contribution to creating a more truthful and compassionate society, religion alone may not achieve change, adding that that also requires reliance on common sense and scientific findings, and encouragement of the development of warm-heartedness here and now.

His Holiness referred to this approach as secular ethics, which gives impartial respect to all religions, rather than their dismissal. He noted that the egalitarian values of original Marxism focused on the uplift of the poor and equal distribution of wealth, that the means of production have been spoiled by a lack of moral principles and that work needs to be done to restore them.

"That's my number one commitment - to intricately make known that the ultimate source of happiness, joyfulness and friendship is deep in here," he said. "Not money. Not power."

His Holiness is currently on a six-state tour of the US. During his time in New York, he also took part in a health conference at The Rockefeller University, hosted a seminar on Buddhism at Avery Fisher Hall and gave a talk on the Essence of Buddhism at the Lincoln Center.