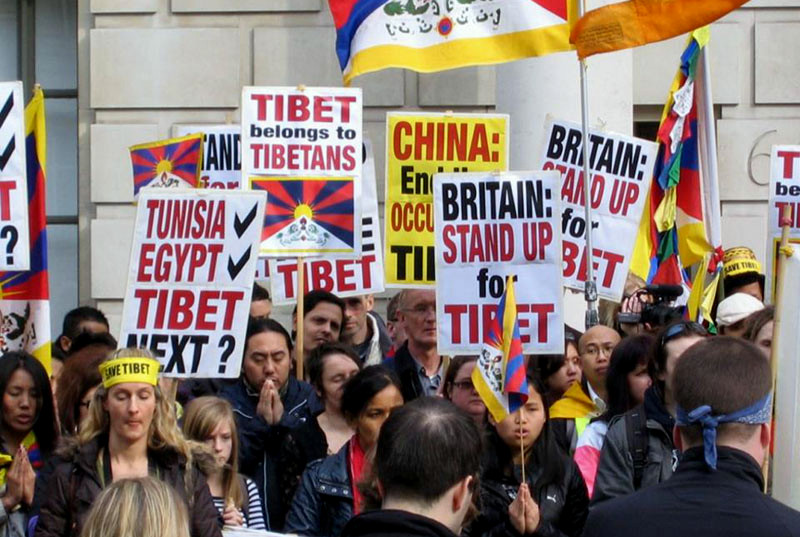 London, 13 February 2013: Members of the British Parliament on Wednesday called on the Chinese government to urgently examine policies in Tibet as separate reports emerged confirming the 101st self-immolation in Tibet and sixth in exile.

Whilst expressing their deep concern that 101 Tibetans have now taken the drastic decision to self-immolate, British MPs have condemned China's crackdown in Tibet and called on the Chinese government to examine their policies in Tibet and urgently address the grievances of the Tibetan people, according to a statement released by London based the Tibet Society.

Almost all of the 101 self-immolators inside Tibet have called for the return of the Dalai Lama to Tibet and many have called for freedom for Tibet and unity amongst Tibetans. In addition to the 100 self-immolations, thousands of Tibetans across the Tibetan plateau have undertaken peaceful protests calling for an end to China's repressive policies.

In response to the 100th self-immolation, Fabian Hamilton (Labour MP for Leeds North East and Chairman of the All Party Parliamentary Group for Tibet) said, "To bring an end to the self-immolations in Tibet, China must engage with the Tibetan people and address their grievances. China must recognise that it is the failure of their policies in Tibet that have led to not only the 100 self-immolations but also widespread peaceful protests in Tibet. China must respect the human and civil rights of the Tibetan people and allow them the freedom to express their unique cultural identity without fear of persecution."

Lord Alton of Liverpool (Crossbench) said, "Though we in the UK cannot condone self-immolations as a form of protest, what we must understand are the reasons as to why 100 Tibetans have taken this extreme form of action, plus thousands of others who have taken to the streets to protest in recent months. China must examine its policies in Tibet and afford the Tibetans the rights and freedoms to which all people are entitled, such as the freedom of expression and freedom of religion."

Nic Dakin (Labour MP for Scunthorpe) said, "China needs to take responsibility for what is happening in Tibet. The Chinese government must end the current crackdown in Tibet and respect Tibetans' human rights, open Tibet's borders to the world and find a peaceful, long-term solution by engaging with representatives of the Tibetan people."

Kate Hoey (Labour MP for Vauxhall) said, "If China wants to be a respected global super-power, it needs to urgently respond to the grievances of the Tibetan people. The Chinese leadership must talk to representatives of the Tibetan people, open Tibet to the rest of world and allow independent access to foreign media, humanitarian agencies and international observers. The British government must not allow China to go unchallenged about their appalling treatment of Tibetans."

Cathy Jamieson (Labour & Co-operative MP for Kilmarnock & Loudoun) said, "With 100 self-immolations and numerous mass protests in Tibet over the past two years, it is time for China to take the grievances of the Tibetans seriously. Rather than respond with military aggression and 'de facto' martial law conditions, China should ease tensions by withdrawing its armed forces and ending its repressive policies."

Tim Loughton (Conservative MP for East Worthing and Shoreham) said, "That 100 Tibetans have taken the heart-rending decision to self-immolate is indicative of the failure of China's policies in Tibet. Instead of addressing these failures the Chinese authorities have responded with force and greater restrictions. The British government must call upon to China to respect the fundamental human rights of the Tibetan people and work with Tibetan representatives to find a peaceful resolution to the ongoing crisis."

Mark Pritchard (Conservative MP for The Wrekin) said, "China may be a strong economic power but it weak when it comes to respecting human rights. There should be meaningful dialogue not repression and exclusion. Only then will these awful, dramatic, and very public cries for help, end."

Philippa Carrick, CEO of Tibet Society, said, "Part of the ongoing tragedy is that Tibetans inside Tibet feel they have no recourse to justice. However, there is growing widespread resistance to the Chinese regime. This defiance is taking many forms; not just self-immolations and protests, but also through the promotion of Tibetan culture and the expression of the Tibetan national identity."

Ms Carrick added that, "It is time for the British government to stand up to China and defend the rights and freedoms of the Tibetan people as it has done for other people around the world, such as in Syria and Burma. Britain should work in tandem with other governments to devise multi-lateral actions which will encourage China to resolve the Tibet issue and end the suffering of the Tibetan people."

The Chinese government's response to the self-immolations and protests has been to intensify the crackdown in Tibet. Security has been tightened and efforts made to stop information from reaching the outside world. New measures have been introduced, including the introduction of charges of "intentional murder" for those suspected of assisting self-immolations, collective punishments for families, villages and monasteries of self-immolators, and bans on traditional funerals and prayer services for self-immolators. Harsh prison sentences have been handed out to those involved in peaceful street protests.