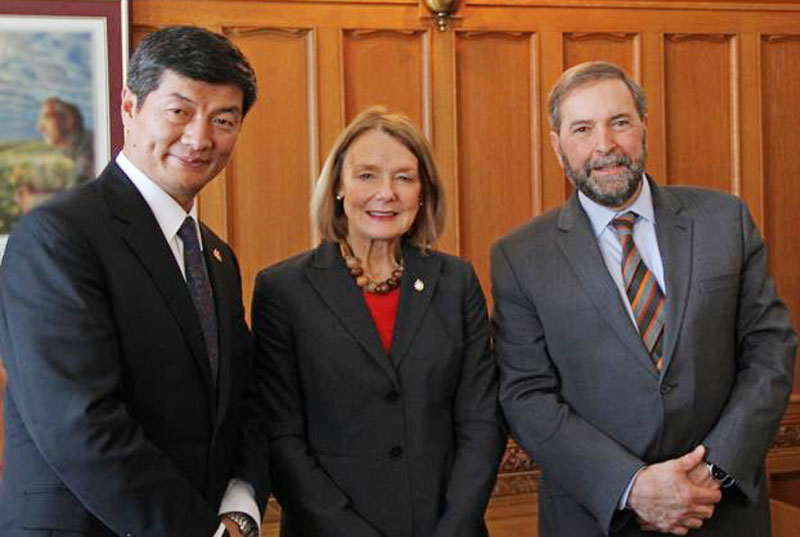 Dharamshala: Dr Lobsang Sangay, Tibetan political leader, has been praised by the Canadian parliament for the work he has done for Tibet during his current visit to Canada and members of the Canadian parliament have called upon Canada to stand with the Tibetan Government in Exile in pursuit of a solution to the ongoing Tibetan oppressions.

The Parliament of Canada held a hearing solely dedicated to discuss the self-immolations on Tibet on the second day of his visit. The Sikyong was the main speaker at the Canadian international human rights subcommittee where he spoke in great detail in the self-immolations, crucially their motivations behind doing such an act, "Their (the self-immolators) universal slogan or aspirations are that His Holiness the Dalai Lama return to Tibet. Canada has witnessed His Holiness visit here, thousands of Canadians have met him, heard him but that right is denied to Tibetans inside Tibet".

"Second aspiration is to have freedom for Tibetans and we full recognize and appreciate democracy, freedom and rule of law are three core principals of Canada and enshrined in the Canadian constitution also and that freedom that Canadians enjoy we would like to have the same", he added. He also urged the Canadians to stand together with Tibet as they have been doing for many many years.

The hearing continued with a question and answer session where his visiting of the committee was welcomed and the information that he shared with the gathered ministers was well received. The Kalon Tripa, has also been undertaking interviews with many national and international media as well as meeting with many Canadian ministers.

Following this hearing Mr Irwin Cotler, a current Member of Parliament for Mount Royal, spoke in front of the gathered Canadian Parliament, "Our international human rights subcommittee received Tibetan prime minister-in-exile, Dr Lobsang Sangay, who provided compelling testimony on the ongoing repression and persecution of Tibetans by the Chinese government."

"Dr Sangay spoke with great sadness of the 107 Tibetans since 2009 who have expressed the ultimate cry of protest through self-immolation, some just days ago, which we ignore both at their peril and our own, to protest against the occupation and environmental degradation of their lands; against arbitrary detention and forced disappearance; and against marginalization, cultural suppression and the denial of religious freedom," he added.

"Tibetans value democracy, freedom and respect for the rule of law, while subscribing to the principle of non-violence in their pursuit of genuine autonomy pursuant to the Chinese constitution," Mr Cotler said in his statement. Irwin has been a strongly outspoken supporter on a wide variety of human rights and his ongoing support for the Tibetan cause is seen as a vast boost to it.

Irwin concluded his statement with great passion and fervor as he listed the numerous ways in which Canada could and should stand with Tibet, "Let us all join our voices with Dr. Sangay in calling on Canada to press China to dialogue with the Tibetan administration, to permit Canadian representatives to visit Tibet, and to work closely with the US, EU and international partners to end the persecution and pain of Tibetans."

Dr Lobsang Sangay's visit has been seen as highly successful in the strengthening of the Canadian and Tibetan relations.