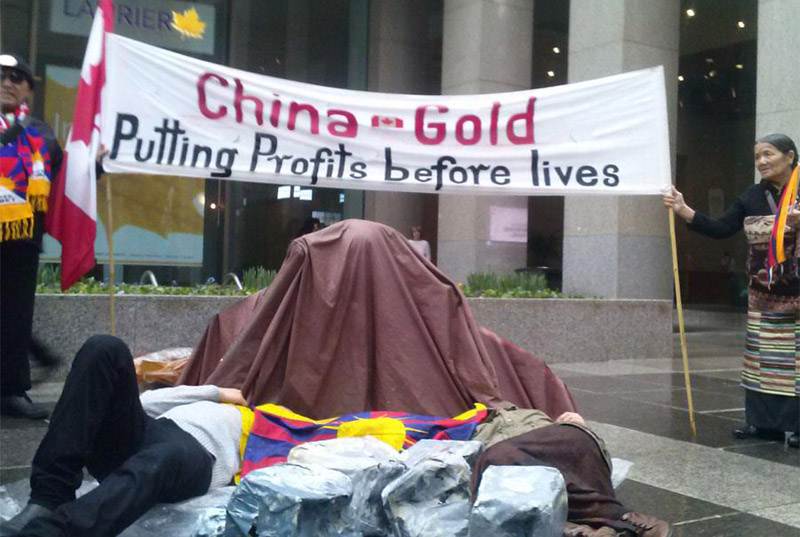 Students for a Free Tibet (SFT) Canada members simulated a landslide in front of the TSX (where China Gold International Resources is listed as CGG) with Tibetans lying on the sidewalk to represent the fatal impacts of mining-related environmental destruction in Tibet.

"This catastrophic landslide shows how China Gold International Resources, a Canadian-based mining company, is tearing apart the fragile ecology of Tibet and triggering devastating impacts on the Tibetan people. This is but a glimpse of the fatal consequences mining in Chinese-occupied Tibet poses for all involved, and particularly for the Tibetan people who are not in a position to give their free, prior and informed consent over the mine operations," said Urgyen Badheytsang, National Director Students for a Free Tibet Canada.

"Canadian and Chinese mining companies are turning the beautiful Meldro Gungkhar valley into the tar sands of Tibet, and this is only confirmed by the pressure from Chinese State media to stick to their reports on this incident."

The study found that the launching of the mining operations in the Gyama valley had been done, "despite the lack of adequate understanding of the hydro-geochemistry of the heavy metals in this very sensitive environment and without that environmental impacts being assessed." and that contamination levels in the Gyama surface water "pose a considerable high risk to the local environment" and "a great potential threat to downstream water users."

"As a Tibetan monk living in Canada, it breaks my heart that a company based in Vancouver funds this kind of rampant destruction," said Jamyang, a Tibetan monk from Gyama who has recently visited the region. "Gyama, my original hometown, is being ruined by open pits, polluted waters, and mass deaths of livestocks, and this landslide is without a doubt a result of reckless mining."

According to Jamyang, more than 5,000 troops with guns were sent into the region to "serve as rescue efforts." He believes they were armed to crush protests by local Tibetans.