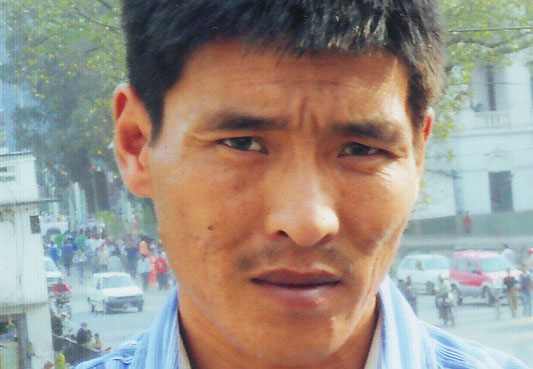 Dharamshala: Tibetan filmaker, Dhondup Wangchen, who has been detained in Tibet since July 2008 under suspicion of separatism and illegally providing secret information outside the country, is among the nominations for the 2009 Reporters Withoud Borders (RSF) International Media Award. Mr Vincent Brossel, the director of RSF Asia Desk, told The Tibet Post that it is not sure to win the award, but he is among the nominations for 2009 RSF Award.

Dhondup Wangchen was detained on March 26, 2008, soon after completing filming of the documentary 'Leaving Fear Behind.' The film documents Tibetan views of last year's Beijing Olympics, the current situation in Tibet, and His Holiness the Dalai Lama's return to Tibet. Several other people involved with or appearing in the documentary have also been investigated by the authorities.

Upon learning of her husband's nomination, Lhamo Tso, Wangchen's wife, said, "I think it is a great recognition and honour from the international communities for my husband's work...He always wanted to show the suffering of Tibetan people to the people of world. The interviews that he conducted were not related to independence movements or separatism. I believe my husband is innocent."

RSF's 'media' award honours media outlets that symbolise the battle for the right to keep the public informed of important events. Vincent said the results will be announced in December after the jury votes.