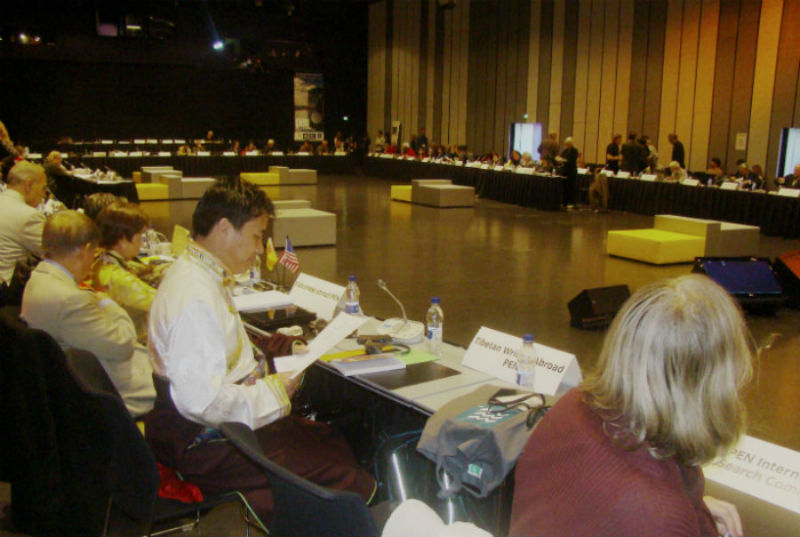 Dharamshala: - The PEN International Congress urged China to investigate the causes of the self-immolation protests in Tibet with honesty and transparency, and to allow independent international journalists access to the region.

A resolution on Tibet was pased by 79th PEN International Congress meeting in Reykjavík, the capital and only city in Iceland last week. Some 200 writers from over 70 Centres, including a six-member delegation from PEN China, who participated in the meeting.

The 79th PEN International Congress meeting was convened from 9th to 12th September, 2013 in the Iceland capital Reykjavik. Minister of Education of the Govt. of Iceland and the Mayor of Reykjavik graced the occasion with their presence, and duly made speeches.

'The global writers group has unanimously decided to press the Communist Government of China on a seven-point Resolution,' Trotsik Choedak said during the press conference.

Mr Choedak said the resolution urged China to "release all imprisoned Tibetan writers, singers and artists in Tibet Unconditionally, (including Dolma Kyab, Tashi Rabten, Gartse Jigme and Jongzey Dhonko) who did nothing other than peacefully challenge restrictions to freedom of expression with their creative works."

"Remove the restrictions placed on certain writers e.g. Tsering Woeser, Jamyang Kyi- which hampers their freedom to move, communicate with others, and their physical and psychological well-being," it said.

It asked China to "investigate the causes of the Tibetan self-immolations with honesty and transparency, and also allow independent international journalists access to the region."

"Stop restrictions over Tibetan Buddhist practitioners and the study and practice of Tibetan Buddhism in Tibet, and allow religious freedom. Tibetan Buddhist philosophy is a culture which benefits a large portion of human society, including Tibetans, Chinese and others," it added.

"Allow freedom of speech, writing and artistic expression for all Tibetans in Tibet, without fear of reprisals or oppression," it stated.

The group said Beijing should "ratify the International Covenant on Civil and Political Rights and incorporate its provisions into Chinese law."

"During the four-day session, each PEN branches from different corners of the world briefed the Congress about their After Action Report, followed by debate and Question & Answers. Sub-committees were also constituted to debate and deliberate on Freedom of Speech and the condition of imprisoned writers," said Mr Choedak.

The group PEN Internationa elected a new executive committee during the course of the session. The resolutions reached out in this session of the Congress were aimed at the seventeen nations with oppressive records on Freedom of Speech and Human Rights. Those nations include among others, China, Russia, North Korea, Syria, Egypt, Hungary, Turkey and etc.

The group resolved to submit a copy of the Resolutions to the United Nations and other International Institutions, as well as other related Governments and their Ambassadors. The Resolution will also be posted on the website of PEN branches the world over.

It was inaugurated in London in the year 1921. Presently, it has 144 PEN branches all over the world. In this session, PEN International was successful in inducting a Delhi and Myanmarian PEN branches.

According to the Tibetan branch, it was accepted as a PEN branch in 2002. At present, it has over 90 writer members from the three traditional regions of Tibet, and the 4th Executive Committee is currently discharging duties with its office headquartered in Dharamshala, India.