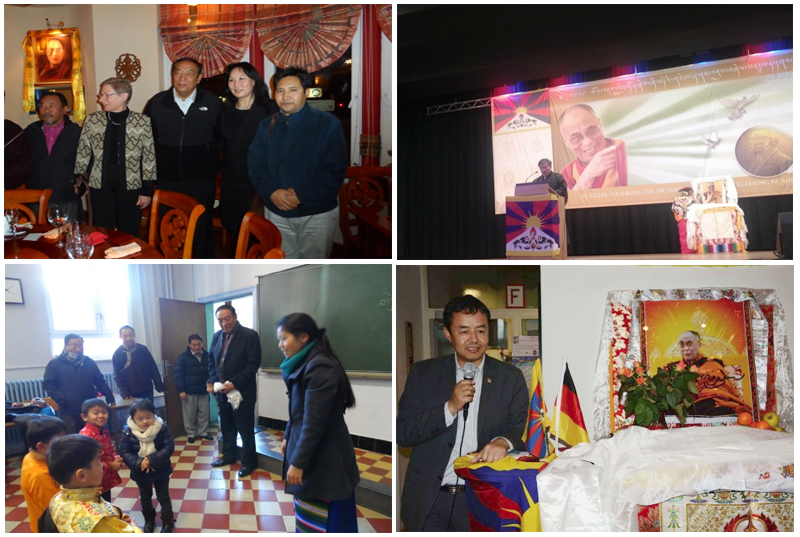 Kalon Pema Chhinjor, from the CTA's Department of Religion and Culture, arrived on 9 December in Brussels to begin an official seven-day visit to Belgium. This timing enabled him to participate in the Belgium Tibetan Community's candlelight vigil on 10 December, a day which marked International Human Rights Day as well as the 24th anniversary of the Dalai Lama's Nobel Peace Prize. According to the CTA, the vigil was held in solidarity with Tibetans living under Chinese rule and in honor of the individuals who have sacrificed their lives for the Tibetan cause.

In the following days Mr Chhinjor toured the country to continue the celebration of the Nobel Peace Prize, visiting Tibetan communities and supporters throughout Belgium in the process. The CTA reports that while traveling around the nation, the Minister of Religion and Culture managed to give talks on a "wide range of issues including current political situation inside Tibet, Middle Way Policy and the importance of preserving our rich culture and traditions."

Kalon Tsering Dhundup of the CTA's Department of Finance joined Tibetan community members from Switzerland and Liechtenstein in Bülach, Switzerland, to commemorate His Holiness' award anniversary. Amongst observations that the Tibetan population in the West continues to grow, Mr Dhundup stated, "As Tibetans celebrate the special anniversary. We must recognize His Holiness the Dalai Lama's advices and put them into practice."

Kalon Tsering Wangchuk of the Department of Health attended organized visits in the three German cities of Munich, Hamburg, and Frankfurt. The minister's words and appearances at these events – as well as the travels of Mr Chhinjor and Mr Dhundup – bring to life the CTA's belief in the importance of reaching out to all Tibetans living throughout the world.

As Kalon Dhundup declared, "We all are like rowers of a boat. We are rowing together for the welfare of the Tibetan people."