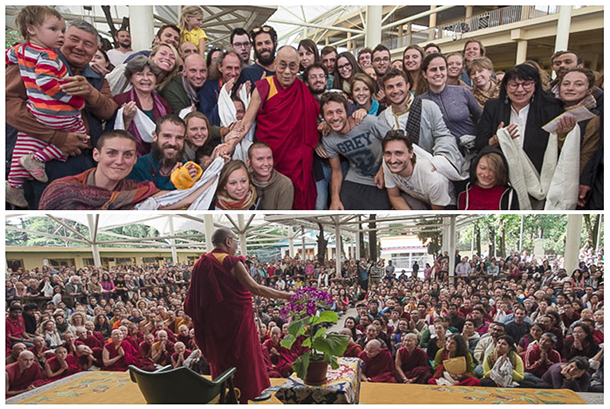 Dharamshala: - The spiritual leader of Tibet His Holiness the Dalai Lama said that the negative impact of the 20th century is threatening world peace, bringing feelings of fear, loneliness and helplessness.

On April 26 2014 His Holiness shared his thoughts on the promotion of human values, religious harmony and ancient Indian thought during a talk to over 2000 foreign and Indian tourists and local residents during a public audience at the Main Tibetan Temple in Dharamshala, India.

Addressing the gathering, His Holiness the Dalai Lama said: "I always consider myself as one of the 7 billion human beings. Mentally, physically and emotionally we are the same. The most important thing everyone wants is a happy life and we all are same as human beings with the same potential to be happy. Wherever I go, I am always telling people about these values. "

For example, here you want a happy life and I also want a happy life.  Meantime, we have same difficult emotions, so mentally we are same as we have the same mental faculty. His Holiness said that the problems we are facing today such as in northern Africa and Syria and the latest crisis in Ukarine are all problems of our own creation.

"All these problems have and emphasis on secondary level differences which forget the basic oneness of  humanity. His Holiness said: 'On the secondary level differences such as “my nation” and “their nation”, “my religion” and “their religion”,  create a strong concept of "we and they," His Holiness said, adding "that is also basis of violence and conflict.'

"People who too much emphasie interest for oneself, regardless of others feelings, then they are not happy in themselves, create a distance from others, eventually develop feelings of loneliness." As well as at society level, he said "if we think about one's own interest, without caring for others, eventually creates suspicion and distrust even with your neighbours, which brings feelings of fear, loneliness, helplessness."

"Once we develop a genuine sense of oneness of humanity, on the basis of secondary level, all the problems and differences certainly will reduce," the Tibetan spiritual leader said. We are now in the beginning of the 21st century.

"There was a lot of bloodshed. If we look back at the development in the twentieth century some historians say up to 200 million people were killed, including many innocent people, women, children and the aged among them," His Holiness said, adding: "Even nuclear weapons were used against human beings.

Did that immense violence really create a better world? "No" His Holiness said. He said "there is a lot of killing even in the beginning of the 21st century, particularly these civil wars first casualties; killing innocent civilians including women and children. This is the negative impact on our inner values from the 20th century."

If the strong mental attitude, concept of “We and They” remained, this century will also not be a happier one. We all want a happier world. Therefore, we must think, what is the real cause of these man made problems, certainly its not the technology, if we use it in a meaningful way.

He stressed the importance of leading a happy life, which could best be achieved by having a peaceful mind and argued that there was nowadays too much emphasis on material values. “Unfortunately,” he said, 'except religious institutions, modern education is very much oriented towards material values, but lacks a corresponding sense of inner values, especially in the secular education field.'

"Therefore, there is the need to promote inner values through education. This will not be achieved by prayer to God. If God really has the ability to bring about a peaceful world, we have prayed to God for several centuries, and failed, we must say realistically and fairly," His Holiness said, while sharing a story about a conference of Nobel Peace Laureates in Hiroshima, Japan.