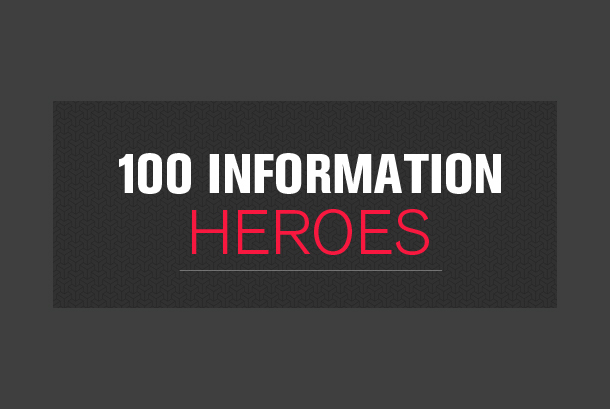 This is the first time an international press freedom group ever is publishing a list of profiles of "100 information heroes."

The group said 'through their courageous work or activism, these "100 heroes" help to promote the freedom enshrined in article 19 of the Universal Declaration of Human Rights, the freedom to "to seek, receive and impart information and ideas through any media and regardless of frontiers." They put their ideals in the service of the common good. They serve as examples.'

"These 'information heroes' are a source of inspiration to all men and men who aspire to freedom. Without their determination and the determination of all those like them, it would be simply impossible to extend the domain of freedom.

"This obviously non-exhaustive list pays homage not only to the 100 famous and less well known people on it, but also to all the professional and non-professional journalists who constantly help to shed light on the world and cover every aspect of its reality. This initiative aims to show that the fight for freedom of information requires not only active support for the victims of abuses but also the promotion of those who can serve as models."

The list of "100 information heroes" comprises women and men of almost all ages (25 to 75) and 65 nations. The youngest, Oudom Tat, is Cambodian and the oldest, Muhammed Ziauddin, is Pakistani. Twenty-five of the heroes are from the Asia-Pacific region, 20 from the Middle East and North Africa, and eight from Europe. Iran, Russia, China, Eritrea, Azerbaijan, Mexico and Vietnam are each represented by at least three heroes.

The lists includes such varied figures as Anabel Hernandez, the author of a bestseller on the collusion between Mexican politicians and organized crime, Ismail Saymaz, a Turkish journalist who has been prosecuted a score of times for his reporting, Hassan Ruvakuki, who was jailed for 15 months in Burundi for interviewing members of a rebel movement, and Gerard Ryle, the head of International Consortium of Investigative Journalists, who has contributed to the emergence of global investigative journalism.

Some work in democracies. They include Glenn Greenwald and Laura Poitras, US citizens who were responsible for revealing the mass electronic surveillance methods used by the US and British intelligence agencies. Others, such as the Iranian journalist Jila Bani Yaghoob, work under the most authoritarian regimes.

Not all are professional journalists. The Vietnamese citizen-journalist Le Ngoc Thanh, for example, is also a Catholic priest. Many, such as Lirio Abbate, a specialist in the Sicilian mafia, have focused on covering corruption and organized crime. This is the case with Peter John Jaban, a Malaysian radio programme host who spent years in self-exile on London, Serhiy Leshchenko, an investigative journalist from Ukraine, and Assen Yordanov, a Bulgarian journalist who has been repeatedly threatened.

The profiles also include activists like María Pía Matta, who has worked for nearly ten years for the World Association of Community Radio Broadcasters (AMARC), defending the freedom of community radio stations in Latin America.

Courage is the common denominator. In Uzbekistan, the authorities had no compunction about torturing Muhammad Bekzhanov to extract a confession. In Eritrea, ranked last in the 2014 Reporters Without Borders press freedom index for the seventh year running, Dawit Isaac has languished in the dictator Issayas Afeworki's jails for the past 13 years. Mazen Darwish, founder of the Syrian Centre for Media and Freedom of Expression and winner of the RWB press freedom prize in 2012, has been held for more than two years by the Assad regime.