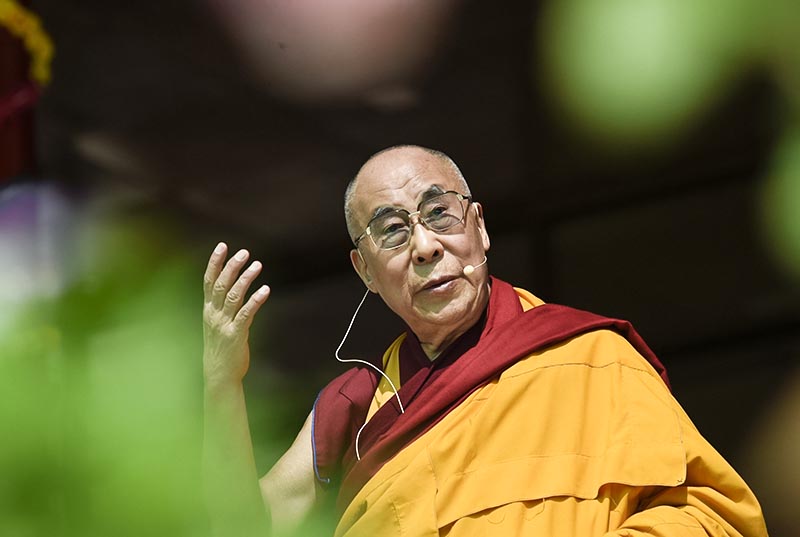 Leh, Ladakh: - 'The six million people in Tibet have placed their hope and trust on me. Therefore, I have an ultimate responsibility for reaching their hopes,' His Holiness the Dalai Lama said on his 79th birthday, adding: 'those Tibetans physically not allowed to celebrate my birthday, in their minds, are celebrating.'

Speaking on Sunday, 6 July, 2014 in Leh, Ladakh, J&K, India, where he has conferred the Kalachakra empowerment and religious teachings, His Holiness the 14th Dalai Lama greeted and thanked well-wishers around the world on the occasion of his 79th birthday.

His Holiness the Dalai Lama's birthday coincided with Kalachakra events in Ladakh. His Holiness expressed his appreciation and thank to a crowd of over 180,000 devotees, including religious and official leaders who were there to greet him and offer prayers for his long life.

The Dalai Lama began his speech by thanking those in attendance at the gathering. He said, 'People of Ladakh, Tibetans and visitors from abroad are making prayers for my well-being...Also, the Mongolian people and people of Mongolian decent in Russia who have such a strong connection to Tibet; I have heard they have offered a special birthday celebration for me. Also, those in China who are not allowed to celebrate my birthday, but are doing so in their hearts, I also would like to thank them all. Also, the people of the Himalayan region who have a connection with me, as a guru disciple relationship...'

He continued on addressing his audience, adding, 'you are joined altogether by many others who are not here, especially people in Tibet who have a special connection with me, many of whom are not allowed to express their faith, I also would like to thank them.'

A great Tibetan master had said that, Tibet is a country surrounded by mountains; therefore it is called the snow-land. The color of the sky is bright, but before the light of dharma came to Tibet, it was a dark country. The Dalai Lama indicated that this is an extremely true statement. 'Therefore,' he said, 'I am sure there are many Indian brother and sisters all over India who are wishing me blessings on this day; I would like to thank them.'

Speaking about his three major commitments, His Holiness outlined the importance of promoting of human value, promoting religious harmony, and to working to preserve Tibet's Buddhist culture—a culture of peace and non-violence.

With regards to human value, he said, 'We don't need to talk about religion. All have been born by a mother and been fed by mother's milk. We have been fed by the mother's love. Therefore, love and care is something natural to human beings.'

He added, 'We all want happiness and friends. Whenever I meet somebody, first of all, I see them as a fellow human being that desires happiness. We cannot eliminate all the suffering in the world, but as long as we have internal peace and stability, no matter how big our adverse situation is we can still remain calm and internally peaceful.'

On the topic of his second commitment, he suggested that not harming others' feeling is the real nonviolence. 'I am a Buddhist monk and in this world, all the major religions emphasize basic human values. And, in that respect they are all the same. It is not nonviolence out of fear. The real nonviolence is out of respect. When we avoid harming someone because we know that it is an immoral act—that is real nonviolence.'

His Holiness said that people claim to be followers of their teachers, but that in fact they are the opposite. If one is a true practitioner, and a true follower of religious teaching, one must try his best to implement the religious teachings. People must have more interaction with each other, and discuss and ponder their differences. We must all come to basic respect and mutual understanding.

'Therefore, my second commitment is to promote religious harmony. And, brotherhood and respect and understanding between different religious communities,' he said.

Speaking on the issue of Tibet as his 3rd commitment, His Holiness said: 'The six million people in Tibet have placed their hope and trust on me. Therefore, I have ultimate responsibility for reaching their goals, and the responsibility for Tibetan Buddhism, which includes the Tantric tradition; an ancient tradition upheld at the great Indian monastic university of Nalanda, and one that we often describes as a complete form of Buddhism.'

'It is very important to preserve the Tibetan tradition. For the Tibetan people, we consider this tradition our heart and soul. This is the crème of Tibetan civilization. And, to further promote and propagate it in the world is the greatest purpose of Tibetans. Tibetans are proud of themselves with the rich cultural heritage of Tibet. Whether believer or non-believer, as a Tibetan, I am requesting them to preserve their culture,' he added.

While stressing on the middle way approach as only way forward to resolve the Tibet issue, His Holiness also reiterated commitment to dialogue to find a solution to the issue of Tibet within the framework of the Chinese constitution.

He said that from the age of 16 to 79 he has taken the responsibility of Tibet and Tibetan culture. 'I am not, not seeking independence for Tibet, but seeking a mutually-acceptable solution to the issue of Tibet. After careful consideration of all the issues, I am pursuing the middle way policy that will benefit both China and Tibet. Many Chinese intellectuals and Buddhists are supporting this view and showing solidarity with Tibet. Each year, the number is significantly increasing.'

'Therefore the most important thing for the Tibetan people is to preserve our distinct politics and culture. We are pursuing a win-win proposition that will benefit both Chinese and Tibetan people,' His Holiness said.

The Nobel Peace Prize Laureate spoke about the importance of non-violence and human compassion. 'My message to all of you is these three commitments that I am promoting. Here I am appealing to my friends all over the world to stand up for justice. Everyone equally has responsibility to this create a happier world. I hope the 21st century will be a peaceful and compassionate century.'

'Wherever you are staying, engage in real actions to promote religious harmony and mutual understanding. His Holiness has cautioned that use of weapons may appear decisive, but brings more fear which does not favor a solution to problems. He stated firmly that 'using such developed weapons to solve problems brings short-term relief but the problem remains will remain the same.'

His Holiness acknowledged that the immense destruction due to the power of modern weapons will only create more problems and more environment destruction. He said 'Non- violence is only solution to all kind of problems in the world. When we try to overcome the crisis, we have to adopt a nonviolence approach, using a human approach, which is the natural human reflex.'

'We should not resort to taking arms and violence. When we look back at history, there will never be an end to the problem of violence. We have adopted a nonviolent approach, a compassionate approach, like the 'Middle Way Approach'. His Holiness said 'if the issue of Tibet is to be solved through their non-violent struggle for justice, it will set an example for many other problems facing the world today.'

'If the nonviolent struggle for Tibet defeated one day, then people will say the nonviolent approach will not work, just like the Tibetan struggle. Therefore, Tibet's non-violent struggle for justice is not only important for Tibetan people, but equally important to set an example for freedom struggles on this earth. So far we have gained enormous international support, good will for freedom and for the resolution of the Tibetan problem,' His Holiness concluded.