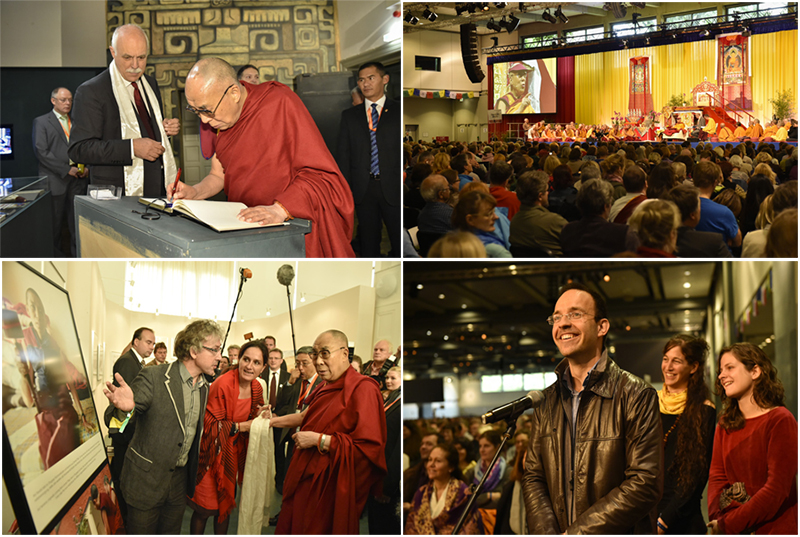 Tibetan religious leader was "Particularly appreciative of the photographs depicting the nomads' way of life, traditions, and the threats that put them at risk," and decried "the negative effects of deforestation, reckless mining for minerals, and the forced settlement of nomads in Tibet."However, he also discussed lighter topics, including his preference for riding yaks over the less-sturdy horses.

His Holiness then processed to the Congress Centre, where heinvited an audience to ask questions. An NKT/ISC demonstrator confronted His Holiness with the allegation that Trijang Rinpoche had described Shugden as an enlightened being, and asked why he had lied in contradicting his own lama, according to the media reports. His Holiness calmly responded:

"But that's just your side of the story. I've been a Buddhist monk almost all my life, and I'm now nearly 80 years old. A key aspect of a monk's discipline is not to tell lies; all my actions have been transparent ... "

Throughout His Holiness' answer, the questioner continued to shout at him. It stated, "Since he (the heckler) had become disruptive, security personnel quietly removed him from the hall."

The next question surrounded 21st century violence and poverty, to which His Holiness replied that modern-day violence and corruption are"clear signs of a lack of moral principles."The leader has continually stressed the need for "secular ethics" in educational systems, and noted this type of teaching would help resolve some of the world's violent issues.

During lunch His Holiness met with a group – convened by Prof Dr Wolfram Weisse –from the University of Hamburg discuss the confluence of religion and modern society. The Professor inquired if dialogue with other spiritual traditions was a natural part of Buddhism. His Holiness answered:

"In his life the Buddha encountered other scholars and practitioners, but whether we can say there was dialogue between them I don't know. On the other hand, he seems to have given teachings from different points of view depending on the circumstances and who he was teaching. In our own time, it is noteworthy that Pope John Paul II introduced the Assisi interfaith meetings and began to refer to religions in the plural."

Reports said that His Holiness then returned to the teaching hall to invite further questions. A woman expressed love and desire to adhere to Buddhist tradition, but was dismayed by a "laziness" that challenged her. The Teacheroffered comfort, noting he tends to be lazy himself, and advised her to seek a clear objective, believing that clear objectives are more attainable than cloudy goals.

His Holiness continued to take questions, and then transitioned to a period of lecture. The following day, he planned to continue his teaching by speaking on Religion and Dialogue in Modern Society. The presentation – and indeed the entire program – was a product of the University of Hamburg's Academy of World Religions in Hamburg, Germany.