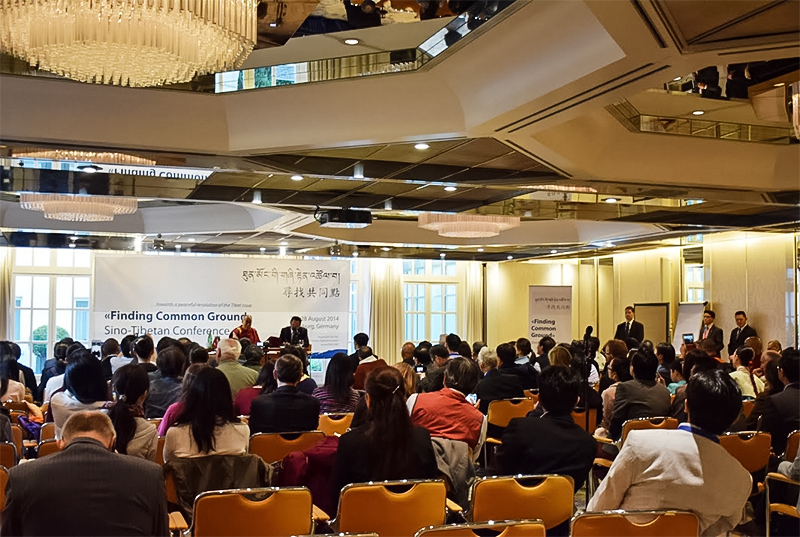 Hamburd, germany: - Describing 'the new Chinese leadership led by Xi Jinping is different from its predecessors,' His Holiness the Dalai Lama said there is a hope that China will 'become a country that others look up to.'

The Nobel Peace Prize laureate first addressed a conference of Chinese and Tibetans held under the theme 'Finding Common Ground.' in Hamburg, Germany, on 28 August, 2014. The conference was attended by over 70 participants from at least 10 countries and including Tibetans and many Chinese intellectuals, activists, and writers. CTA said it is aimed at finding a common ground in pursuit of a "just and peaceful resolution to the issue of Tibet through dialogue and reconciliation."

"In 1974, those of us Tibetans with responsibilities in our administration discussed what we were going to do. We realized that sooner or later we would have to talk to the Chinese authorities and consequently we could not set any preconditions about independence. Since then we have reached out to Chinese whenever we could."

His Holiness explained how Tibetans had first encountered Chinese communists in 1950/51 and that in 1954 he paid several months' visit to Peking, meeting Chinese leaders like Mao Xedong, Deng Xiaoping, and Hu Yaobang. He mentioned beginning to develop admiration for socialists and feeling close to the Chinese he met. However, later things changed.

He said Tibetans have had long experience of living together with Chinese people and that is why they tried to reach out to them. He recalled telling a Chinese official he met on the way that on his outbound journey he felt apprehensive, but on the way home he felt confident that things could be worked out. He had shaken hands with Mao Zedong when they parted.

"The People's Republic of China is the world's most populous country." His Holiness said. "It has the potential to make a great contribution to the world, but Japan and other neighbouring countries, India among them, share a significant apprehension about it. This is an obstacle to China's entering the international mainstream. China has its own customs and traditions, an immense population and a rapidly expanding economy. There is hope in this that it can become a nation that others look up to."

The spiritual leader of Tibet said that Indian friends have told him that the new Chinese leadership of Xi Jinping and Li Keqiang are different from their predecessors. In the past, when party meetings took place, everyone had a prepared set speech to read, but they don't do any more. His Holiness said he has heard from a former Indian minister who met Xi Jinping in Brazil that he is not like previous leaders; he has a more humane demeanour.

His Holiness repeated what he has said before elsewhere that the 1.3 billion Chinese people have a right to know the truth. If they have that, they can judge right from wrong. Transparency is important, he said, while censorship is immoral and unhelpful.

His Holiness clarified that for 15 years or so, dating back to Samdhong Rinpoche's first term as Kalon Tripa, the Central Tibetan Administration has not used the term 'government in exile', nor referred to the political leader as Prime Minister. The Chinese authorities say they don't recognise a Tibetan government in exile, nor do they recognise what they refer to as 'greater Tibet' and yet this is an expression of their coining. He said that he was criticized for meeting with Rebiya Kadeer, the Uighur leader despite having persuaded her of the merit of adopting a non-violent approach, which was a positive move.

"I've always wanted to visit Wu Tai Shan. I thought about going there in 1954. Then it came up during the 5th round of talks with the Chinese, but was rejected," His Holiness said referring to the holiest of four sacred Buddhist mountains in China.

A member of the audience wanted to know how to resolve the quandary that there is suppression of religious groups in China, but Western governments do not want to pressure China for economic reasons. His Holiness replied that the US government publishes an annual report about human rights in China that explicitly mentions Tibet. Meanwhile, he said that he appreciated Chancellor Angel Merkel's recently speaking openly about human rights in China.

"When there was talk some years ago about China being granted Most Favoured Nation trading status by the USA, I was in Washington and was asked about it. I stated that as the world's most populous nation China deserved it. Similarly, I supported China's bid to stage the Olympics. What China lacks is democracy and a sense of moral responsibility, which they need if they are really going to open up to the world."

He mentioned that it seems that during the National Congress of the Communist Party of China meeting in November issues concerning the judiciary will be discussed. He asked:

"Why don't those of you who are lawyers look into and write about the judicial system? Raising slogans is one thing, but taking quiet, steady action may be more effective."

His Holiness was asked whether Sino-Tibetan communications have been expanding or shrinking in recent times. He answered that they have been increasing; there has been more interaction. He said more and more Chinese are coming to hear him teach and 2-3 years ago he began to teach groups from the mainland. He quoted Xi Jinping's recent remark that Buddhism has an important role to play in reviving Chinese culture and the finding that there are now said to be 300-400 million Buddhists in China.

His Holiness told the delegates that he had to leave to begin his journey back to India, but that the elected Tibetan leader, Sikyong Lobsang Sangay and others were on hand to answer their questions.